And Now For The Rest of the Story

Ginny came over to our house, opened the door and ordered me outside. She said I had been hibernating with the germs too long. So I went over and sat in the sunshine and visited for about an hour.

I finally felt like I was going to live this morning when I got up. I still have a terrible cough and my back muscles really hurt from coughing so hard for so long. But I’m on the road to recovery.

Jim is doing much, much better. He worked on the generator and putting all the Christmas decorations away today. We’re ready to enjoy 2014.

Several of you asked about my Dad’s story. He was totally and completed committed to “his” city, Sidney, MT. One of the most patriotic men I have ever known. 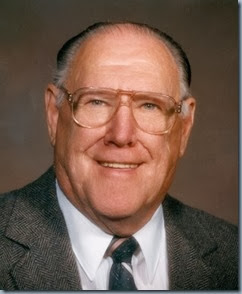 He met my Mom (Olive) when she lived at his parent’s house and worked for room and board. She was a country girl and needed to do that so she could finish high school. The day after Dad turned 21, he and Mom eloped. They went to Wibaux and were able to get the judge to leave the golf course long enough to marry them. They then returned to Sidney and it was three weeks before they told anybody they were married.

My Dad was the town hooligan. He and his buddies, Bob, Joe, and Robert, were always causing problems around town. Mom was a quiet lady and Dad’s father actually tried to talk her out of being married to his son. Just couldn’t understand what she saw in him. His Dad, Ben, was one of Sidney’s first councilmen when Sidney was incorporated in 1911.

Mom knew that underneath all that tough, macho shell was a really good guy. Dad served in the Army in the South Pacific from 1941 to 1946 and his job was to “clean out” remaining Japanese solders, who were hiding in caves. He never really talked much about the war but he liked to tell about the time he missed the boat. He had to catch the next boat and was late getting back to Seattle. Mom was NOT happy.

In 1955, Dad was elected as a City Alderman. Two years later, at the age of 37, he was elected Mayor. He was Sidney’s youngest mayor ever and spent eight years in that position. Then he served 19 years as the Public Works Director.

Dad is on the right with one of his old cronies. 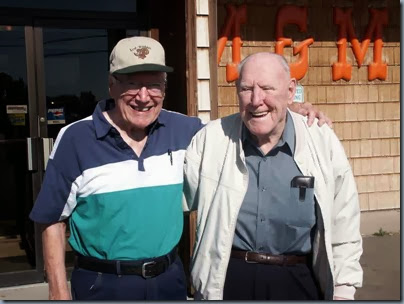 After he retired, he really didn’t know what to do with himself. The final straw came when he decided to rearrange my Mom’s kitchen. That was one of the worst arguments I ever remember them having. Needless-to-say, the cupboards were put back to their original order and Dad decided to run for Mayor again.

His second stint as mayor was 1984 through 2000. When he left office, he was Sidney’s oldest mayor ever. He served as Mayor for 24 years and loved almost every minute of it. People, especially older folks, loved him. He received the Lifetime Service Award in 2001 from the Montana League of Cities and Towns.

Dad was also very active as a Kiwanis Key Club Advisor and as a Little League baseball coach. He loved being involved with the youth. I remember a trip he took with the Boy Scouts when my brother was involved with Scouts. They hiked down to the bottom of the Grand Canyon. My Dad was an “older” father and was not an outdoor person. He got down to the bottom of the Canyon but he couldn’t get back out. So the rest of the Troop hiked up to the top and sent a mule down to get him.

He and Mom celebrated 67 years of marriage just a couple of weeks before Mom died. Dad died in March of 2010.

Here are a few of the quotes from businessmen who knew him:

“Harold was a very effective mayor. He had the ability to bring all parties together.”

“Harold was very conservative and fiscally responsible. Harold knew where every sewer line and every water line was located. He understood money, taxation and people. He ran a pretty tight ship.”

“He was a great leader, a great speaker. He was very conservative and yet very progressive. He always looked at Sidney’s needs 20 years down the road. Yet he was very concerned that the city’s reserves were always there.”

There were times when we felt like we came second to “his” city but I was so very proud of him.