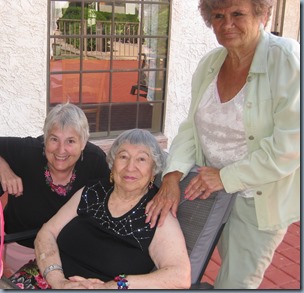 (I don’t have a current picture of Aunt Happy on this computer yet, so this is an old one from 2010. Whoever took the picture almost cut Judy’s head off but this was the only family picture I could find.)

On Friday, August 23, 2013, my Aunt Happy celebrated her 100th birthday. When I talked to her on Tuesday before her birthday, she was busy trying to decide what she wanted to wear and what jewelry to gussie herself up with. When my sister talked to her on Thursday she was really starting to get excited about the party.

When I tried to call her Friday night to see how the party went, I didn’t get an answer. I called again on Saturday and finally got to talk to her. Seems she went to another party after her party was over and wasn’t even home when I called. (I figured she was at home in bed trying to recuperate.) Should have known better.

She had a fantastic time. She adores being the center of attention and enjoyed every minute of all the greetings. They had a three piece band playing and lots of food and cake. She said around 200 people were there for the party.

But she didn’t have time to talk to me for very long because she was getting ready to go out with some of the girls for a luncheon. Her spirits were soaring and she was feeling wonderful.

I’m hoping somebody will give her copies of the pictures they took so I can post them when we get back down there to see her.