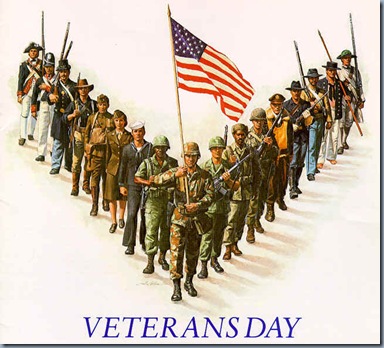 To commemorate the ending of the "Great War" (World War I), an "unknown soldier" was buried in highest place of honor in both England and France ( (in England, Westminster Abbey; in France, the Arc de Triomphe). These ceremonies took place on November 11th, celebrating the ending of World War I hostilities at 11 a.m., November 11, 1918 (the 11th hour of the 11th day of the 11th month). This day became known internationally as "Armistice Day".

In 1921, the United States of America followed France and England by laying to rest the remains of a World War I American soldier -- his name "known but to God" -- on a Virginia hillside overlooking the city of Washington DC and the Potomac River. This site became known as the "Tomb of the Unknown Soldier," and today is called the "Tomb of the Unknowns." Located in Arlington National Cemetery, the tomb symbolizes dignity and reverence for the American veteran.

In November 1919, President Wilson proclaimed November 11 as the first commemoration of Armistice Day with the following words: "To us in America, the reflections of Armistice Day will be filled with solemn pride in the heroism of those who died in the country’s service and with gratitude for the victory, both because of the thing from which it has freed us and because of the opportunity it has given America to show her sympathy with peace and justice in the councils of the nations…"