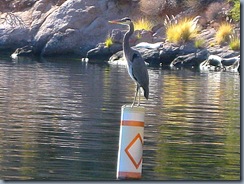 We’ve had a great week. Jim’s been fishing and so his fishing pox is almost cured. The final cure would be to actually catch some fish that are big enough to bring home.

We were supposed to meet Jeri & Terry and Diane & Phil at Superstition Skies on Wednesday night, but Jim was late getting back from fishing and Jeri & Terry were exhausted from their long day. So we cancelled those plans and went to Filly’s on Thursday night to listen to Brant and Kerry. Sure do like those guys. 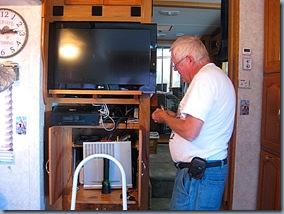 Friday, Jim worked on getting the surround sound working but without success. He’ll try again later. 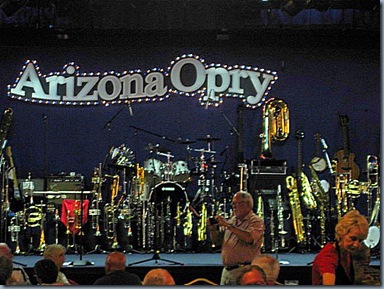 Friday night we met up with Jeri & Terry again, this time at the Arizona Opry. What a fantastic show they put on. The food was really good considering they were feeding 200 or 300 people. And talented – the lead guy (George) could play almost every instrument you see on that stage. He was the lead singer for the Tokens. Remember the song, The Lion Sleeps Tonight? 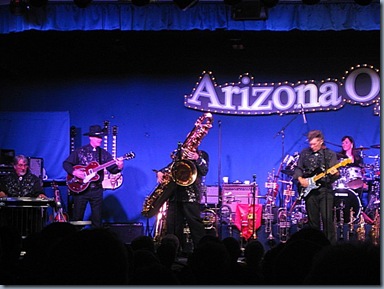 It’s a family show that was started by the twin sister’s Father. They also hire musicians to work in the kitchen, usually college kids, who perform a number also. George’s grandson is 6 years old and he came out and performed a dance routine with his Dad that was really fun.

During the summer months they perform at the Rocky Mountain Opry in Estes Park, CO.

A wonderful evening with great friends.