A Visit to a Foreign Country - Molossia 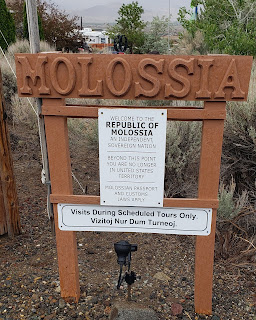 I like to find strange and different places to visit when we are traveling. To me they are so much more interesting and fun then the usual tourist spots. So even though it was raining/snowing and cold we had a date for a tour with President Baugh of Molossia.

How many of you are familiar with micro-nations?  I first heard about Molossia and micro-nations when I was reading through Atlas Obscura's website on Nevada. I figured this was right up my alley.

A micro nation is an entity created and maintained as if it were a nation and/or a state, and generally carrying with it some, most or all of the attributes of nationhood, and likewise generally carrying with it some of the attributes of statehood. Though a micro nation may well have begun as a mere drollery, it has the potential (given the evolution of a sufficiently vital national culture) to develop into a true nation, and possibly to achieve statehood.


Clear as mud as far as I was concerned. So I started reading President Baugh's website. It was kind of like going down the rabbit hole with Alice. I had no idea that a micro nation could exist inside the United States. An independent, sovereign nation not recognized officially by other world governments. Once I knew this place existed I had no choice but to sign us up for a tour.

We honestly thought we were going to be the only people who would be dumb enough to show up for the tour because of the rain and cold, but almost 30 other idiots joined us. 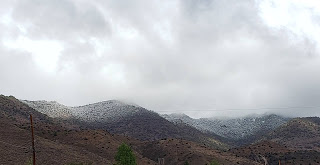 There was a couple from Belarus as well as royalty from around the area - Miss Virginia City and a couple of other princesses. We also had a visiting micro-nation, the Kingdom of Kelley, that had just been created. 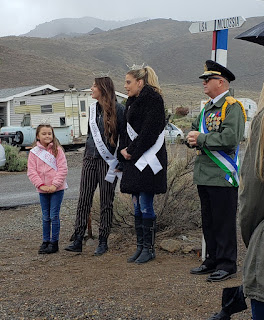 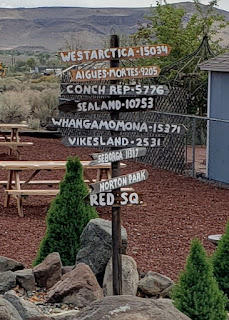 There is so much I could say about Molossia but I'm only going to give you some highlights and let you go to their website for some fun reading.

We were welcomed across the border by President Baugh and had our passports stamped. 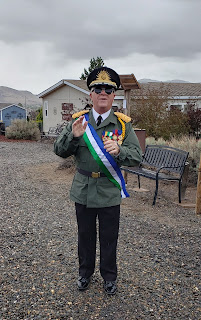 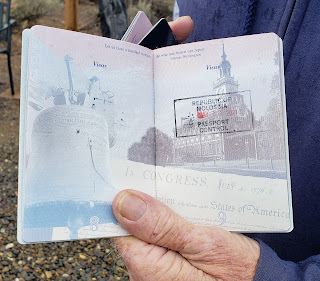 Jim was also greeted by the First Lady and Chief Constable (Mrs. Baugh and daughter) 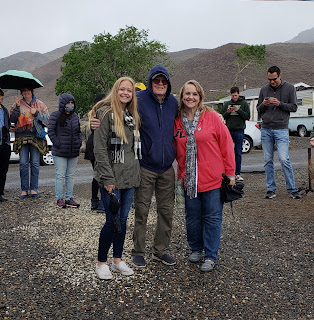 President Baugh then explained the history of his country as well as their beliefs and how their government is run by him.

Molossia's seat of government is located just outside of Dayton, NV even though they also claim 50,000 acres on Venus.

They have their own form of government (a republic), a banking system and currency, a post office, a navy, a space program and citizens (34 but in August they will add one more).

Like most micro-nations, Molossians have a great sense of humor.  Their currency, the Valora, is valued in raw cookie dough. So if you want to buy one of their war bonds you need to bring the cookie dough with you. I forgot to do that. 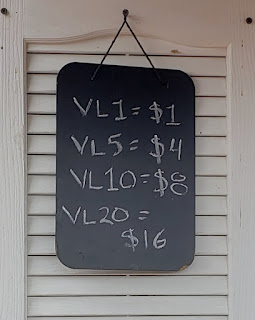 Molossia asserts that they have been at war with East Germany since 1983. East Germany no longer exists but there is a small island off the coast of Cuba that belonged to East Germany. When East Germany was dissolved in 1990, this island was not mentioned in any official documents and is technically the last remaining part of the former German Democratic Republic. So Molossia has been waging war with an uninhabited island and will continue the war until the island no longer exists. 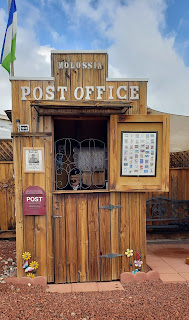 From the website: April 30 is a national holiday, Heroes Day. This date was selected because of its relation to Camerone Day, the observance of the Battle of Camerone, wherein 65 French Foreign Legionnaires fought against 3000 Mexican soldiers in an heroic last stand. Long admired by His Excellency, The President, the anniversary of this iconic battle is a perfect date on which to recognize our own heroes. An observance will thus be held on 30 April every year, both to remember the wartime heroes of Molossia as well as the individual Heroes of Molossia.

We had a state ceremony while we were there to welcome the newly established micro-nation of The Kingdom of Kelley. 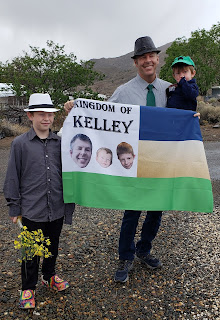 No you cannot apply for citizenship. President Baugh suggests you establish your own micro-nation.

There is so much more but this post is already long enough. So take a trip over to their website www.molossia.org and enjoy yourself.


This picture gives you some idea how cold it was. Jim is in long pants, has a hat on, a hoodie, and his hands in his pockets. 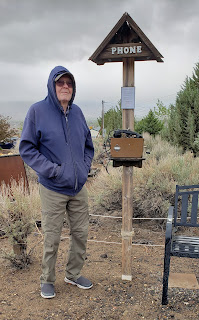 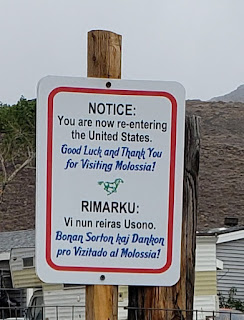 Even with the miserable weather, this is a tour that we both are really glad we made the trip to Molossia.
Posted by Jim and Sandie at 8:49 PM