The Hall of Fame is located in downtown Charlotte – at least I think it was downtown. There was a whole lot of traffic and I saw several guys in suits and ties riding electric scooters all over the place.

Jim continued to take lots of pictures like I asked him to. So if you are tired of looking at cars you might want to skip this post and the next one. 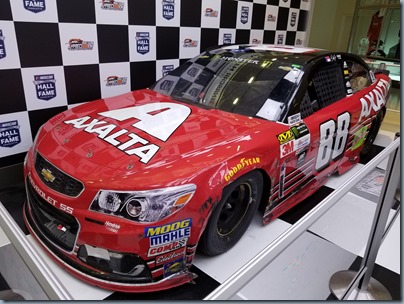 There were two buses of munchkins but they were herded into the theater so Jim was able to stay ahead of them and watch the movie at the end of the tour.

Racing simulators give visitors a driver’s experience and perspective on race day. Since Jim has actually driven several race cars, he didn’t spend any time on the simulators. 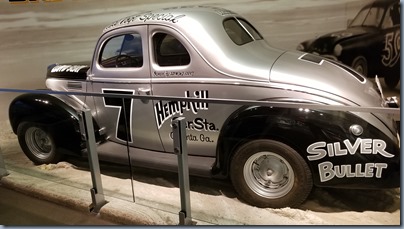 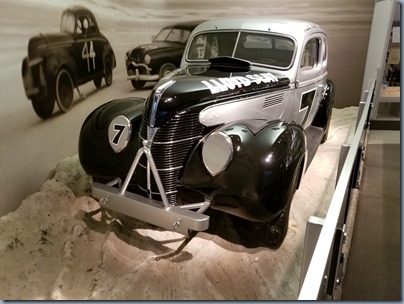 The following cars are all found on Glory Road.

1952 Hudson Hornet  -In late 1951, Tim Flock drove  the No. 91 Hudson and in his first race won at Lakewood Speedway in Atlanta. In 1952, Flock won eight times in the No. 91 to capture his first of two NASCAR premier series championships.

1957 Ford Fairlane – in 1957, Fireball Roberts drove this car to eight victories. It was known as a “zipper top” for its removable hardtop.

1964 Plymouth Belvedere – With 200 wins, Richard Petty is the undisputed “King of NASCAR”. He started his career in 1958 and in 1964 he captured his first of seven Daytona 500 victories and first of seven championships in his HEMI-powered Plymouth. 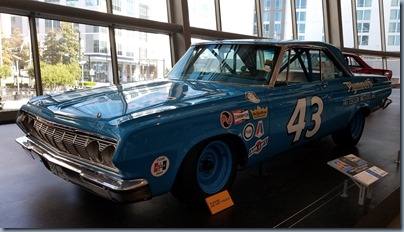 1966 Ford Galaxie – As one of the few African Americans to compete in NASCAR’s highest level during the 1960s, Wendell Scott faced many challenges. Using secondhand parts and also serving as car owner, crew chief and mechanic, he still managed to win against better funded teams. In 1963 he became the first African American to win a NASCAR premier series race.

1966 Dodge Charger – Driver David Pearson started driving the Charger in 1963. In 1966 the sloped back roofline provided an aerodynamic advantage and ushered in a new era of race cars. Pearson won 15 races and the championship that year.

1939 Chevrolet Coupe – Driven in 1970-1971. Richie Evans’ career took off behind the wheel of this car which he ran on shorts tracks. He was known as the Rapid Roman because he came from Rome, NY.

1976 – Chevrolet Monte Carlo – This car was dubbed “Bertha” by her driver Darrell Waltrip. He took the wheel in 1976 and remained successful for five seasons. 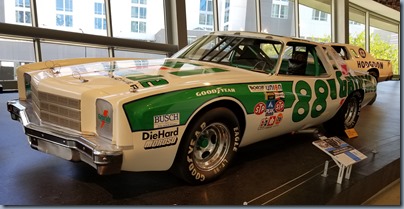 1987 Ford Thunderbird – In 1987 Davey Allison had five poles and two wins to make him Rookie of the Year.

1991 Oldsmobile Cutlass – Green is considered to be an unlucky color for drivers (sorry Michaela) the green No. 33 Skoal helped “handsome” Harry Gant to victory lane 18 times. When I met Jim he was dating two Carols. One of them was Harry Gant’s niece. 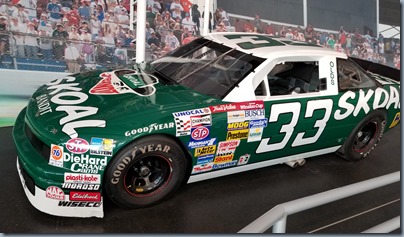 1992 Ford Thunderbird – This car was driven by Bill Elliott known as Awesome Bill from Dawsonville. His son Chase is currently driving the No. 9 Chevrolet. 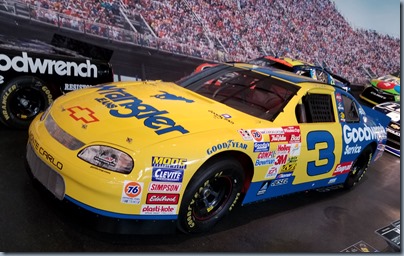 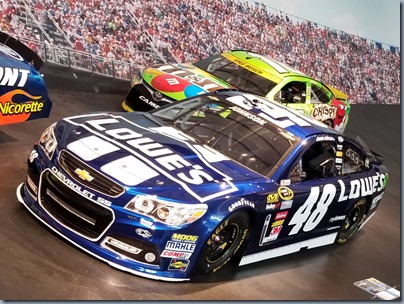