Just for the record, I looked at my blog for this week last year and it was in the 70’s.

I also wanted to add a note about the fish tacos – these tacos are made with a white fish and a variety of 17 different ingredients including tomato, cheese, France’s coleslaw and mango salsa. I left off the coleslaw and cheese but let me tell you that mango salsa was fabulous.

I just want you all to know how much my hubby loves me. My sister is a garage sale addict. She found a garage sale that she really wanted to go to this morning and Jim agreed that he would take her and of course I went along. We got up at 5:00 a.m. (that’s five in the morning before the sun comes up) so we could heat up the house and Jim could get the girls out before we left. The garage sale started at 6:30 and we had to be there before the crowds. It was only 31 really cold degrees.

We picked Judy up and found the garage sale at just about 6:30. This garage sale was a fundraiser for the East Valley Democratic Party. So we were expecting it to be a large affair probably in some building. Boy were we wrong. Did I mention that we drove 30 miles to get to this place?

It was at somebody’s house with no lights out on the driveway. At 6:30 in the morning it is still really dark out. They clearly did not expect anyone to show up on time because they did not have anything put out. Everything was still in boxes and bags. And there didn’t appear to be much of anything. However, my sister did find something to buy (she always does) – a small white board to hang in her kitchen for $1.

We had a great laugh and called ourselves the three idiots. We did end up having a good breakfast at U.S. Egg. 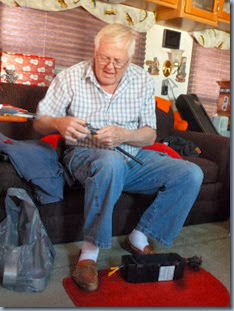 We took Judy grocery shopping and then headed home to the let the girls out. Jim had a couple of projects to work on today and we had to make a run to Lowes for supplies.

First he repaired our old surge guard. The wiring got destroyed at an RV park in Wyoming. I don’t know what Jim did but I know he was able to replace some of the wiring and we now have two surge guards. 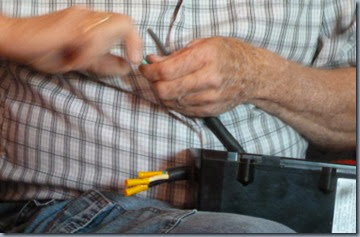 After finishing that chore, he started to work on a generator muffler box. I have no idea what it is really called but he researched on line how to build a box to put around the generator to make it quieter. 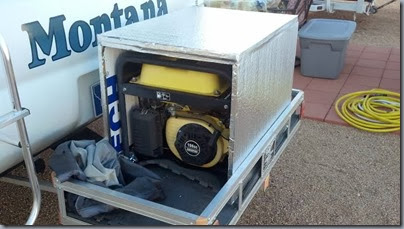 Had to order a small box fan for it which won’t arrive til Tuesday so he’ll have to finish it later.

Tonight we are tired. Watching Jim do his projects wore me out.

One more picture. When we got to Coconuts Jim backed into a parking spot which is what he usually does. I used to get out and guide him back because he has the ball hitch on the truck but with his new back up camera (yes, he also installed one on our truck) he thinks he doesn’t need me anymore. I guess this proves that he doesn’t. This is exactly how the truck ended up in the parking spot. 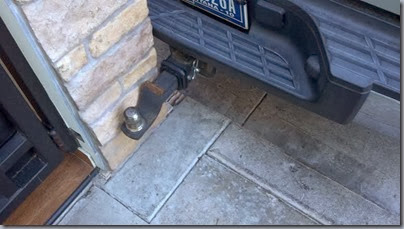