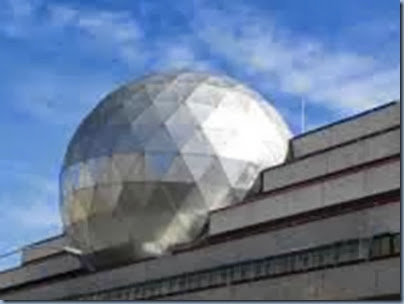 When I read about this stadium I knew it was a must stop for us. My dad owned a bowling alley when I was a teenager in Sidney, MT. We went to Florida and to California with Dad when he went to Bowling School. The first trip was to learn how to repair the pinsetter machines. The second trip was when they upgraded the machines and he had to learn how to take care of the new machines. Those first machines broke down on a regular basis and Dad would have to go in the back and reset the pins manually.

“Bowling is kind of a big deal in Reno. While most cities have bowling centers, we have a stadium. That's right - a stadium. The only facility of its kind in the world, the National Bowling Stadium (referred to as the “Taj Mahal of Tenpins" by The Los Angeles Times) is dedicated to the classic sport of bowling.”

This stadium was opened in 1995, cost $47.5 million dollars and took three years to build.

This three wheel cycle by B.S.A. debuted in 1929. It had a reverse gear, electric started and a top. It also had an air-cooled engine that powered a 3 speed gearbox and front wheel drive. It was donated to the stadium by one of the owner’s daughters. 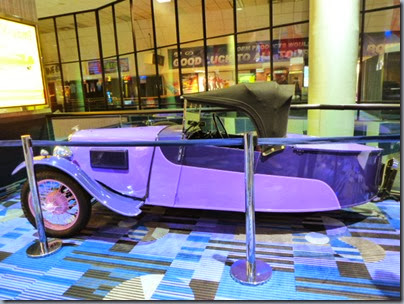 We were disappointed when we got there because the Hall of Fame and Museum were closed. The signs say they are open daily but the security guard told us that they are really only open when there are tournaments happening. The guard said the only reason the building was open was because they had an event planned for that evening. But he told us we could take a look around and take pictures as long as we stayed off the lanes. (Why anyone would walk on the lanes in regular shoes is beyond me.)

This is not your ordinary bowling alley. When you walk in the door there is a bronze sculpture of a family on their way to bowling. It was given to the Stadium by the Brunswick Corporation. 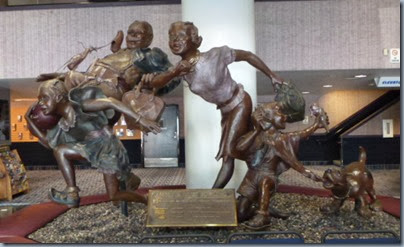 You can take an elevator or ride the escalator to the fourth floor tournament level. 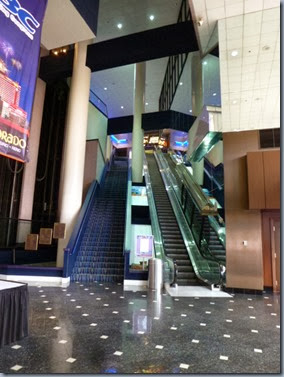 There are 64 lanes (our bowling alley had 8 lanes). 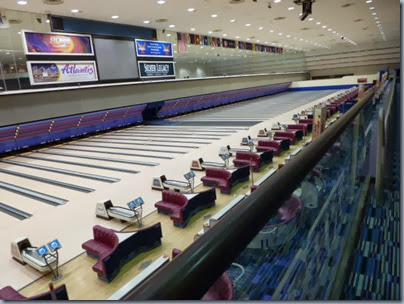 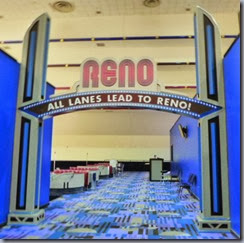 At one end of the stadium is a separate room with 10 lanes. This area can be rented out for parties if not in use for tournaments.

This section has two lanes more than our bowling alley. 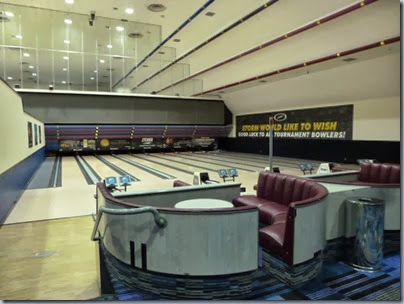 Drinks are not allowed down in the bowling area so they provide these booths with tables for bowlers to use between their turns. 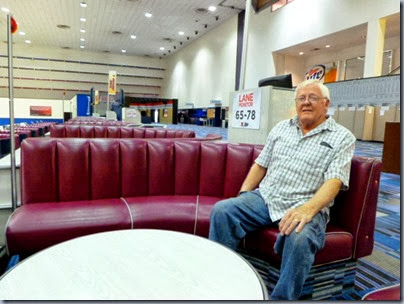 I was totally amazed by this place but this section really caught my attention. I think this area can be converted to a huge theater but it looked really strange to have all this seating at one end of the building with sky boxes. 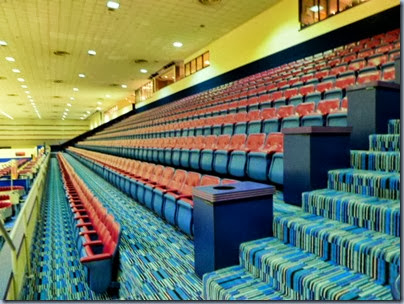 It seems a shame to me that they don’t allow public bowling here. It is strictly for tournaments and other special events. Such a waste of an awesome facility. 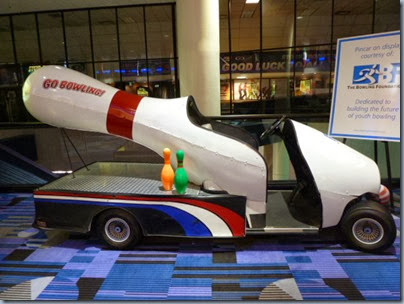