“The main reason I play Bingo is to get me up off my butt so I don’t just sit in my room and read.”

She loves to have her picture taken. 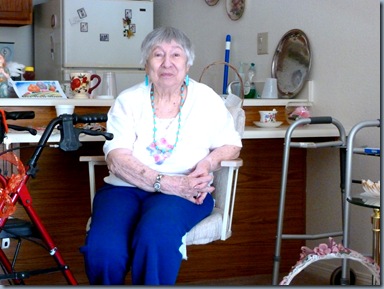 Aunt Happy just cracks me up. We stopped in to visit with her and she needed us to pick up some items for her at Walgreens. She told us that when we came back she probably wouldn’t be there because she would be upstairs playing bingo. We talked a bit about playing bingo and she was rather upset because she hadn’t won the big pot of $6 or $7 for quite awhile.

She also told us about when my Uncle Don died. They had just returned from the Panama Canal on Thursday and Don’s 74th birthday was on Saturday. A friend had a birthday party planned for Don so they enjoyed the party and Don was pretty tired when they got home. The next morning he went out to get the paper and was sitting at the table. Happy was in the bedroom when she heard a noise and went out to see what it was. Don had a heart attack and died before the paramedics could arrive. She has been on her own for over 25 years now.

We also stopped to see my sister and the four of us went to Panda Express for lunch.

Jim’s done some more fishing and as soon as the weather improves, he’ll be out on the water again. Caught about a 2 pound large mouth bass and this one he brought home because Cam and Lois wanted fish for dinner.

Thursday night we went out to dinner at Romano’s Macaroni Grill with Paul and Dianna and Evelyn. Had a fun time and the food was wonderful. However, the place is noisy and conversation was almost non-existent because you couldn’t hear across the table. Cold Stone for dessert. 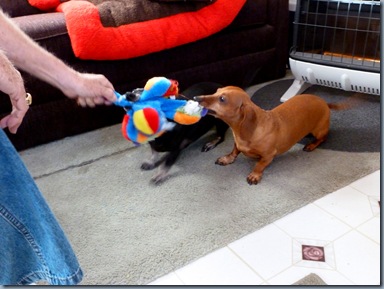 Paul leaves today for Australia and New Zealand for two months. We’re taking him to the airport this afternoon.

The weather has turned windy and cold and rainy. Hopefully by the end of the week we’ll have some sunshine and warmer temps.