Winter arrived in Arizona with lots of rain and snow. Yes, snow. The Superstitions were covered with snow today and it was down low on the sides of the mountain. This is definitely a very rare occurrence. Snow has been seen on the top of the mountain but not like this. 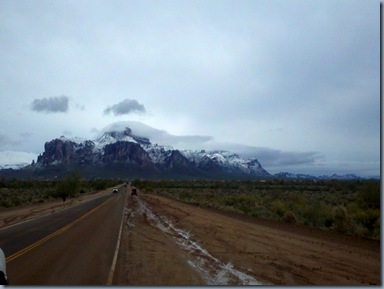 There must have been 100 cars out there with people taking pictures of the Superstitions. 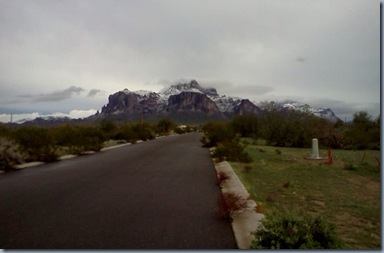 Scottsdale was covered in snow. The kids were loving it and the weather people were just hyped on TV. A lot of natives were excited about the snow but those of us who come from the north, couldn’t work up that kind of enthusiasm.

Here in Apache (Petticoat) Junction, we had rain and rain and more rain. But the storm has now moved on through and has just left the cold weather behind.

The weather folks have been telling us that a lot of what was seen in downtown Phoenix was not really snow or hail but was graupel. (This was a new term for me.)

Graupel, also called soft hail or snow pellets, refers to precipitation that forms when super cooled droplets of water are collected and freeze on a falling snowflake, forming a 2–5 mm ball of rime. Strictly speaking, graupel is not the same as hail or ice pellets, although it is sometimes referred to as small hail.

Whatever it is called, it was white and cold.