My internet connection has been really lousy as in non-existent. Hopefully this will post eventually.

Sunday a group of us went to the Desert Bar, officially known as the Nellie E. Saloon.

Wishful thinking that Mickey will have cell phone service. 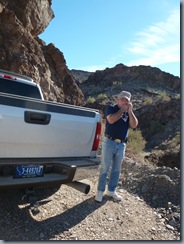 The Nellie E Saloon is located in the Buckskin Mountains about ten miles outside of Parker, AZ. This used to be an old copper mining camp named the Nellie E, but in 1975, a guy decided that he would buy the property and give the “bar in the desert” idea a try. I would have told him he was nuts but the place is a great success. 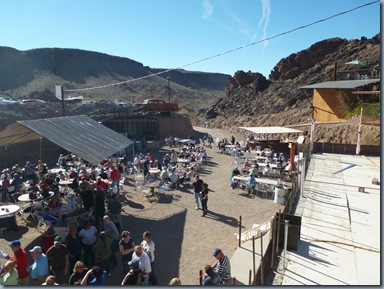 He had to haul a 50-gallon tank of water loaded on the back of his truck. Now he has a well (360 feet) that operates on solar power.

Entrance to the Desert Bar 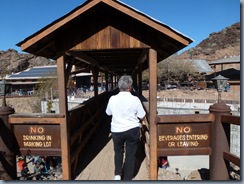 The saloon is also powered by solar energy, stored in batteries and run through inverters.

Standing in line to get food 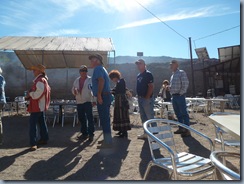 Bring cash because they don’t take credit. And it is rather expensive. Jim and I split a philly cheese steak (without the cheese), an order of fries, and two bottles of water for $18.

Bill building his sandwich and Vern concentrating on something. 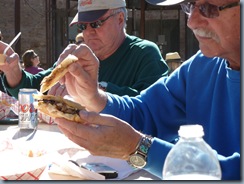 The church is made of solid steel and the walls and ceiling are made of stamped tin. The roof is made of copper. 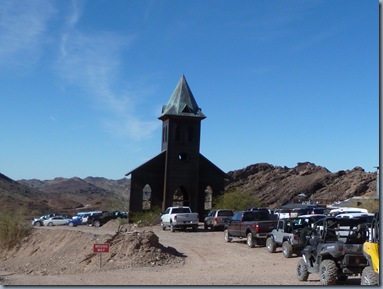 They are only open on Saturdays and Sundays from noon to 5:00. And the place is packed with people who are willing to drive the horrible road to get there. 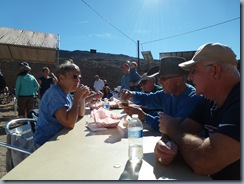 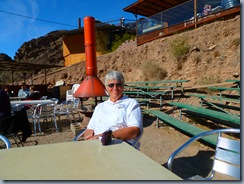 We are finding that there aren’t near as many folks visiting Quartzsite as in previous years. The last time we were at the Desert Bar, all of the tables were full and so were those benches behind Ginny.