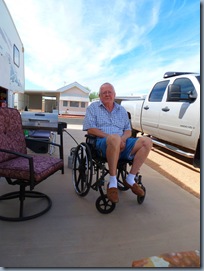 I haven’t posted in awhile because I’ve been waiting until we had some news from all the tests on Jim’s leg. I also haven’t been reading too many blogs because we’ve been running all over the Phoenix area for those tests and seeing the doctors. But hopefully soon I’ll get caught up.

Jim needs to have surgery one more time. They do say three times is the charm, right? That makes three for this year. This one isn’t as serious as the others which is nice. However, if he doesn’t get it fixed he could lose his leg.

The artery in Jim’s left leg is 50% blocked. So not much blood is getting through and that is why he has been having the terrible cramping and pains in that leg. We saw the surgeon yesterday and he is going to do an angiogram and use the balloon to open up the artery. Then he’ll put in as many stents as needed.

There is a chance this won’t work. Jim had stents put in his heart an they didn’t work there but we have hopes that it will be okay this time. If the stents don’t work, they will do a by-pass in his leg. I didn’t even know they did such things. I knew about the heart by-passes because Jim has had two of them. The main reason for all these problems is the fact that Jim was a smoker for many, many years until he met me. He hasn’t smoke in almost 20 years but the damage had already been done.

Our surgeon is the same doctor who did his lung cancer surgery and we are really happy about that. He is excellent and we have complete confidence in him.

The surgery will be sometime in the next two weeks and we will be so glad to get it over with. In the meantime, Jim is not supposed to do much walking. So we went to Goodwill and found him a wheelchair and I get to push him around even more than I already do. (Doesn’t he just look soooo happy in that picture.)

The really bad news is – no fishing. But since the boat is still in the hospital, that helps a little bit.