Jim dumped this morning, we hitched up, pulled out and went around the corner in our park. Jim wanted to double check the brake lines and then decided to drive slowly through the park to adjust the new brakes. We turned another corner and heard a big thump. I got out to check and found that the fifth wheel was sitting on top of the truck bed. The hitch had not locked (even though we both checked it) and had allowed the fiver to come loose and fall. 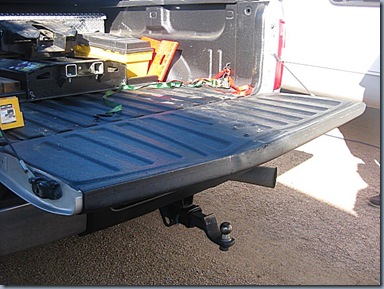 My pictures don’t really show the damage. Jim said he can get better pictures tomorrow but these will have to do for tonight.

It could have been a lot worse. A whole lot worse. Even though it’s bad. Jim had placed our generator underneath the hitch and then landed on the generator more so than the truck bed. We will have to replace the tail gate on the truck but it still shuts. The sides of the bed are okay. No damage to the fifth wheel. 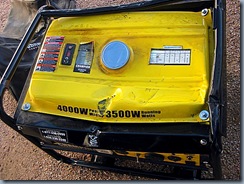 But the generator was smashed really bad. Broke the gas tank and we had gas running everywhere. Of course, everybody in the park came out to see what was going on so I made sure nobody was smoking.

Jim was able to hitch back up and we went back around to our site. Unhitched and unloaded the generator and checked to see if there was any other damage. Didn’t find anything else.

Jim set off on a mission to find us a new generator. Many hours later he found one at Cabela’s over in Glendale. By the time he got home and got it all set up, it was getting dark. We still might have one hang up in the morning. This generator is slightly taller than our other one and we’re not sure it’s going to fit in the back of the truck with the RV hitched up. We’ll have to check that out in the morning.

Then hopefully we’ll be on our way to Q.