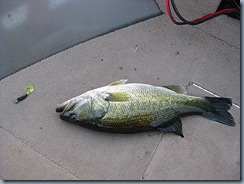 An almost totally uneventful week. Jim did some fishing before the cold weather moved in. It’s been raining and cold since Thursday and I am not a happy camper. I think the rain is supposed to be out of here tomorrow but it’s not going to warm up very much for the next week.

We’ve practiced cribbage and Thursday night Jim went to the clubhouse to play poker with the guys. 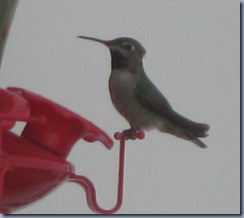 We did get our hummingbird feeder up and have been enjoying the birds and their battles for dominance. It was a rainy and dreary day that the picture really didn’t turn out very well.

Yesterday we went to Mesa to open my sister’s park model. She’s flying in on Monday so we did what we could to make the house ready for her. Her hubby will be driving down with his son later in the week with a vehicle that they are going to leave here in AZ. They will then fly down to AZ in the fall and back to Helena, MT for the summer. My sister has Restless Legs Syndrome and cannot handle the long drive any longer. Turning on the electricity took a little longer than it should and also getting the pilot light lit. But next year we’ll be able to do it in half the time

Today we went to visit Aunt Happy. Her hearing aids aren’t working so it was a struggle to talk loud enough so she could hear us. She always tells such fun stories. This morning she went to the Lion’s Club breakfast as the guest of honor because she is one of their largest donors. But the pancakes weren’t cooked all the way through, they didn’t have real cream or half-and-half for the coffee, the orange juice was the cheap kind and so were the sausages. She was really glad that she didn’t have to pay the $6 for the meal because it really wasn’t worth it. Then all these guys came up to her and were giving her hugs and telling her how good it was to see her again. She didn’t have a clue as to who they were; so she was happy to get home and back to her book.

This Willy’s was sitting in the parking lot at Aunt Happy’s Senior Living Complex. Isn’t it beautiful? 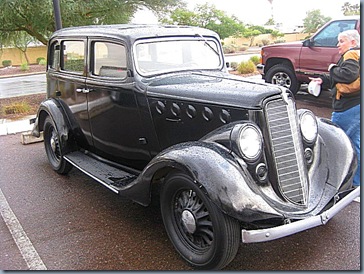 I also have lots of help when I’m on the computer. Today it was Scooter’s turn to work with Mom. 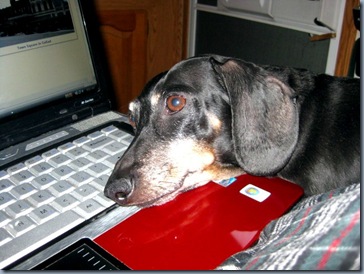