RENEWING AN OLD (AND I DO MEAN OLD) FRIENDSHIP

Jim hasn’t been feeling good the last couple of days. Some kind of stomach bug. Hopefully today will have him on the mend again. The girls love it when one of us doesn’t feel good because they get to spend the day curled up in bed with us. One of their favorite things besides eating.

Yesterday on Facebook our friend (Vaughn) had posted that he was going to be at a restaurant in Mesa last night for dinner. He’s from Glendive, MT and was only going to be in town for about 12 hours. He had some business that needed to be taken care of down here. So I decided to surprise him. I’ve known Vaughn for 30+ years. He’s one of the best pals I’ve ever had but it’s been three or four years since I last saw him. 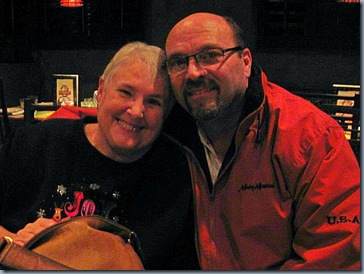 Headed out in plenty of time to find the restaurant, or so I thought. Jim just didn’t feel up to going with me and I haven’t driven the truck in awhile so I left way early. Good thing I did because I couldn’t find the stupid restaurant. My GPS quit working and even though I had the address of the place, I couldn’t find it. I finally gave up and called. They are tucked in the back of the parking lot behind an IHOP. Must have driven by it six times. It was dark out – about 7:00 p.m.

Vaughn was definitely surprised to see me because he didn’t realize that Jim and I were even in the area. (He’s not very good about computer stuff so following my blog doesn’t exist in his world.) He also doesn’t have a cell phone. He still has a land line. Unbelievable. 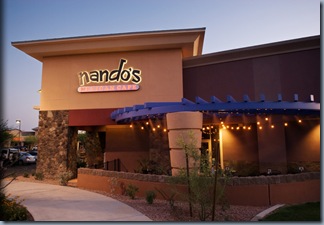 Nando’s Mexican Restaurant. Vaughn’s favorite place and I thought it was okay. Kind of expensive – my two taco’s with rice and beans was $11.00.