AND THE MORAL OF THE STORY IS

Don’t ask the question if you aren’t willing to make big changes.

Awhile ago, we were out to dinner with friends and somehow the conversation got around to the “what if” scenarios. Somebody asked Jim what he would do if I were to die next week or next month. His answer was – sell the motorhome and buy a fifth wheel. When asked why he would do that, he said he wanted to be able to take his boat with him which he can’t do with the motorhome unless he gives up his vehicle.

When we got home we continued to carry on this conversation and it has led to big changes in our lives, once again. Guess that’s what we get for sitting in one place for so long. A need for change.

For the last couple of months we have been on the hunt for a truck and a fifth wheel. Both are hard to find up here (at least the one’s in our price range) because the oil field workers are snapping them up as soon as they become available.

We did find a fifth wheel (after looking at every one in town and many hundreds on line). We had already put a deposit on one at Pierce RV but we needed to make a trip to the post office. Coming out of the post office drive way there’s a small RV dealer right across the street. Jim said, “Let’s just stop in here and look.” We found one we liked better and that was actually in much better shape inside. Pierce was great about our deposit.

So we are now the owners of a 2004 Keystone Montana 29.5’ fifth wheel. But no truck. The RV dealer was wonderful about holding our rig for us on his lot until we could come up with a truck.

Trying to find a Chevy Silverado Crew Cab 2500HD diesel is next to impossible. Once again, that’s the truck that they want out in the oil fields. Since Jim retired from Denny Menholt Chevy here in Billings, all of the salesmen out there were trying to find him a truck and not having any luck at all. We test drove a couple of trucks but weren’t happy with them. Found one at Lithia Dodge and test drove it. Made some really strange noises that I wasn’t comfortable with.

Finally found a truck on line at Chevrolet of Helena. Helena is about 240 miles west and north of Billings. Jim called the dealership and they still had the truck. He told the guy he would be there that afternoon to look at it. He threw a couple of things in a plastic bag suitcase and took off. Spent many hours negotiating on the truck (I really don’t like the way they sell cars but Jim knows how to play their game.) They finally gave us what we wanted as a trade-in on the Avalanche and came down in price to what we said we’d pay on the truck. About 6:30 he left Helena. Got as far as White Sulphur Springs and said that’s enough. Spent the night and came home the next day.

We have a truck – need to have the hitch installed. We hadn’t  gotten rid of our super glide hitch from our Hitchhiker but we needed new brackets. Takes a week to get the brackets. Need a tool box, a hitch put on the RV (for the boat), a spray in bed liner, and I can’t remember what all. It’s been an endless round of taking the truck in somewhere for something.

Last night we took possession of our fifth wheel and moved it to a storage lot. Today new tires and then the horrendous job of moving which I hate, hate, hate!!!

As you can tell, we really haven’t been sitting around waiting for parts to come in on the motorhome. By the way, we still haven’t heard from Hansers about the parts on the recall. Guess we’ll wait until we get moved out before we start pushing them on it.

Anyone want to buy a beautiful low mileage motorhome? 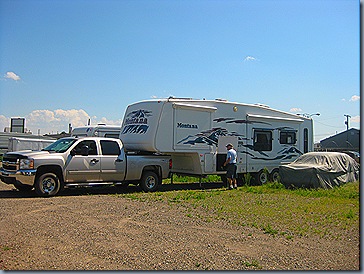