How to Ruin Dinner Plans According to Rocky Joe

I was so excited because Jan and Bill were going to be in our campground for a couple of nights. It’s been a long time since we last saw them.

But, as often happens, plans did not go quite as planned. On Tuesday when we were gone, Rocky Joe hurt himself somehow. He was really favoring his right front paw. This happened once before in AJ and the vet told us that he had probably bruised his foot and gave us some pain medication for him. We still had some of the meds left and he responded to them really well.

RJ only has one speed – and that is full speed ahead. Trying to keep him calm and slow him down going up and down the steps to the bed is impossible. He also jumps up on the dinette benches and onto the table when we’re not around.

After Jan and Bill got set up, we took both Skittlez and Rocky with us to visit with them. We then decided to head up the road to Winston and grab a burger and fries at the Big Bull Grill. Jim stayed home with Rocky since we can’t trust him and I brought him back a burger. It was so good to see such good friends again.

They had things they wanted to get done on Friday so I told them I’d fix dinner. Rocky was feeling really good Friday morning so he and Jim went fishing. I fixed a chicken pot pie for dinner and told them to be there about 4:30 for dinner.

This is the only picture I have and that’s because I took it from Jan’s blog. 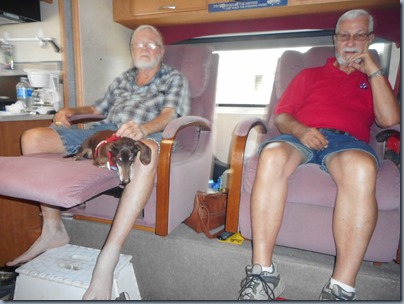 The four of us were visiting as the pot pie finished baking when Skitz decided she wanted to jump up on the bench with Jan. She slid off the seat and she must have fallen into RJ cause he went into attack mode. When he went after her he really hurt himself. He was crying with pain and when Jim tried to pick him up, he attacked Jim. (Remember he has no teeth, so he can’t really hurt anyone but he sounds really mean.) We all thought he had broken his leg.

I got on the phone and tried to find a vet in Townsend but the only vet was out on a farm call and they didn’t know when she would be back. We have used a vet in Helena before and I called their office. They closed at 6:00 and it was almost 5:00. Their appointments were booked and told us that we would be charged for a $150 emergency visit. Fine with us as long as they could see him.

I pulled the pot pie out of the oven and even remembered to turn the oven off. Grabbed a plate and made sure Jan and Bill got some to take home with them. We also gave Rocky a pain pill but he cried while Jim carried him to the truck. I got Skitz in the truck and we headed for Helena, 30 miles up the road.

The vet put a muzzle on RJ in order to examine him and she thought he had a fractured shoulder or a chip that had broken off. Time for an X-ray. Good news, sort of. Nothing was broken or fractured. However, his little body is full of arthritis. This shoulder socket was especially bad because sometime in his past, he had injured that shoulder and torn all the cartilage. When Skitz fell into him, she must have really jarred his shoulder which was already hurting.

We left the vet with two different pain medications and today is he is doing really good. We are not letting him do any steps or jumping of any kind. Jim can carry him without any pain and he’s not limping much at all. He will have to be on a long term pain control maintenance program. We are also going to try and train him to a crate over the next several months because we don’t dare leave him.

I know this is long but I wanted to document everything that happened for my own information. I really appreciate the fact that Jan and Bill were so understanding when we ruined our dinner plans.