Marysville House, an Accident and Thieves

Last Thursday evening we went up to Marysville (an old mining town that is almost a ghost town) for a steak dinner to celebrate Jim’s birthday. I’ve posted pictures about Marysville before and the fact that they have the best steak in or near Helena.

Jim and I split the Porterhouse and it was so huge, we brought home enough steak home for Jim to have steak and eggs for breakfast. (I forgot to take the picture until after we had eaten.) It’s also a beautiful drive up into the mountains. A very enjoyable evening. 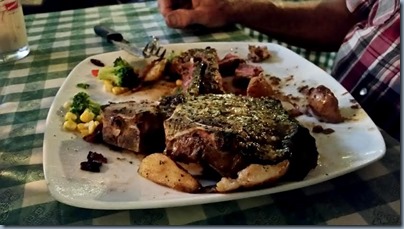 However, on our way home we needed to stop at the grocery store which took us a different way. Driving up Montana Avenue we came upon an accident that had just happened. One guy was scrambling down the bank to get to the scene and Jim stopped the truck and joined him. Several folks called 911 and I grabbed the girls’ blanket out of the backseat to cover up the guy who had been ejected out of the car. I was really impressed at how quickly the emergency personnel responded. Also, people who stopped to help started directing traffic and clearing the way for the emergency responders. 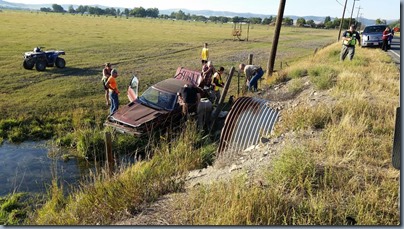 The guy was able to give Jim his Dad’s phone number but Jim had to leave a message. He wasn’t in a lot of pain – or he was in too much shock to know he was in pain. It appears that alcohol was involved and he did not have a driver’s license – only a Montana ID. I would say he was in his mid to late 20’s. The paramedics were able to get him on a backboard with his neck in a brace. They had to cut down the fence and winch him up the embankment. Haven’t heard how he’s doing but I hope he’s okay.

Friday Jim got a call from Al (back in AJ) while he was out fishing. Seems our RV park got hit by thieves. Several park models and sheds were broken into. They stole the winch off of one fella’s Jeep and they also got our generator which Jim had bolted and chained down. They were very prepared and organized. It’s amazing how angry and violated you feel when you get a call like that.

It is very sad that there are so many people out there who would rather steal than work. Really tests your ability to forgive and have hope for this world of ours.