My great niece Tara Jo brought her significant other, Eric, and their son, Emmett, to visit. Emmett is such a sweetie but I have forgotten how much energy it takes to keep up with a toddler. 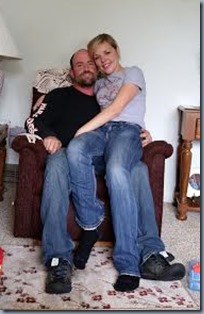 Emmett – why do they love those boxes? (he was in constant motion, so it was hard to get a clear picture) 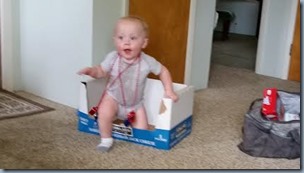 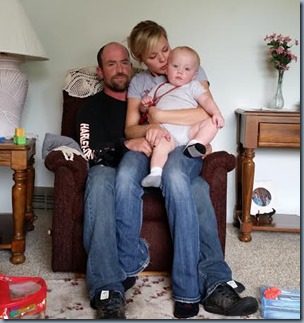 We had a wonderful visit and hope we get to see them again before we head out.

This fawn’s mother must have told him/her to stay put because he stayed in that spot for an entire day. If we got too close (when Jim got out of the truck he was really close to the fawn) he would get up and move to the other side of the bush. As soon as we moved further away he came right back and laid down. I was worried about him because I thought maybe his mom had gotten hit by a car and killed but I read that they will leave the fawns for up to eight hours while they are out eating. He was gone when we got up the next morning so I sure hope mom came and got him. 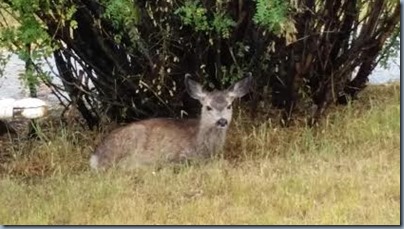 Jim has been fishing every day and he’s even caught a couple of walleye. Nothing big enough to keep though. He went to Canyon Ferry on Tuesday but he said there was a lot of green algae covering the lake because it is turning over. Did you know that lake’s turn over? I sure didn’t but they do. Had to Google it to find out more about it. So he’s been fishing at Hauser Dam.

I was a little concerned about him fishing at Hauser because we had a manhunt underway for a murder suspect in that same area. He was considered armed and dangerous. So I worry. But they were able to apprehend him yesterday so I can quit worrying about that.

The weather has been beautiful. No smoke in the air. But a cold front is going to move through Monday and our highs are going to be in the low 60’s with rain.