Yakking and Jim’s Back

Even though we are currently in Helena, the blog is still in Riverton. 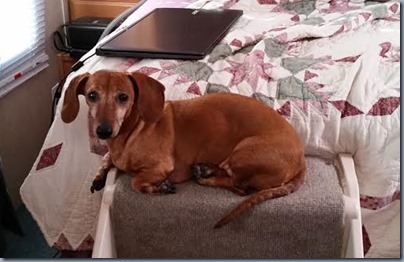 One of my very best friends retired and lives in Salt Lake City. Janet and I worked together at the IRS for many years until I retired and hit the road. I was able to get in touch with her and we were able to spend most of Thursday together just yakking.

Her car is out of commission so she rides TRAX – Utah’s rail system. The closest stop to Ray and Cindy’s house was the end of the red line and she agreed to ride out there and meet up with me so we could go into town for lunch. Ray gave me a ride over to the train station and it was really simple to figure out. Much simpler than DC’s Metra.

Janet arrived about 10 minutes after I got there and we both got on the train and headed out. We were so busy talking we completely forgot to get off the train to switch to the one that would take you downtown. So we just rode to the other end of the red line up at the University of Utah and then back down again. Made the switch and got off at the mall downtown. We ended up at Johnny Rockets for lunch and were there for about three hours just catching up. She then rode the train back out to my stop with me and Jim was there to greet us. It was a fantastic day spent with a truly wonderful friend.

However, not a single picture did I take. Not one. Didn’t even cross my mind. I also didn’t take a picture of Ray and Cindy. Think I am out of practice after sitting for so long in AJ.

While I was off having a great time Jim had a chiropractor appointment. His back was really in bad shape. Sure wish we know what he did to it. We found a chiro only a couple of miles from the house and he felt better after the adjustment. He came back to the Bungalow and took it real easy for the rest of the day.

That night we went to Dickey’s BBQ for dinner with Ray and Cindy. Check out Ray’s blog. Good food and good friends.

Friday Ray wanted to take us sight seeing but Jim really didn’t feel up to it. Cindy had the great idea that Jim should use their Jacuzzi tub and let it work on his back. I didn’t think he was ever going to get out of that tub. It made him feel a whole lot better.

Saturday morning Jim had another appointment with the chiro at 8:15 and when he came home we hitched up and pulled out headed for Idaho.