Nancy asked me a couple of questions and that gives me something to blog about.

Nancy wanted to know if Jim was a fly fisherman. He has done some fly fishing but he much prefers to sit in his boat and troll for fish. Especially now that he is older because fly fishing is much harder on his back.

She also wanted to know what we thought about living in the Bungalow after two months. We love it. It really is the perfect length for us (23’) and with the one slide, we have more than enough room.

However, there are a couple of issues. The major problem is that the couch is so uncomfortable and we both have back aches from sitting on it. The bench seats aren’t any better. I’ve found that if I sit with my feet on my step stool (with a pillow on top) that I have less problems. Still not very comfortable. We ordered Jim a new folding rocking chair. It fits between the couch and the bench seat and works so much better for him. Makes for interesting contortions as we move around in the rig but that can also be a lot of fun.

The other big problem is mine, not Jim’s. I can’t reach anything. I can’t even reach to plug in the toaster if I don’t stand on my stool. I also can’t reach to turn on the fan which is over the bed. My sense of balance is really lousy so I can’t climb up on the bed to reach it.

Other than those issues, we love our Bungalow. The Hensley Hitch is incredible. Can be challenging to hook up if the ground isn’t level, but when you are towing, the camper doesn’t sway at all. Jim thinks that with this hitch, the Bungalow tows better than the fifth wheel. 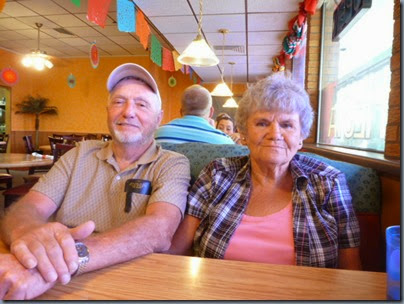 Last week was my sister’s birthday so we took her and her hubby out to dinner. We let her pick and she picked Mexican. Only problem is, she doesn’t really like Mexican. Took me forever to figure out that she was trying to please her husband. Sometimes I just don’t get their relationship. If it was my birthday, I certainly wouldn’t pick a restaurant just because Jim would like it. It would have to be my favorite. He can pick the one he wants on his birthday.

Anyhow, it was pretty good. Judy ordered tacos with ground beef and no tomatoes. Came out with tomatoes so she sent it back. Second time it came out with no tomatoes but chicken instead of the beef. She didn’t want to “create a scene” so she didn’t send it back. Once again, I would have sent it back. Can you tell that we may be sisters but we have very different personalities.

We’ve have some beautiful sunsets this summer. 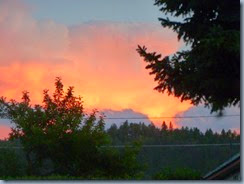 Mom, stop with the pictures. 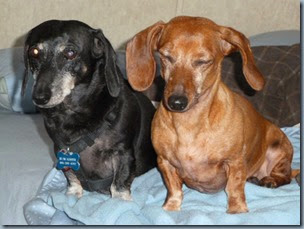 Did you say go hunting? 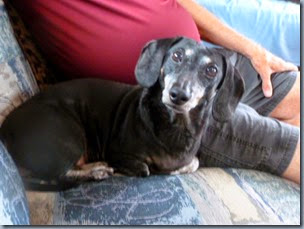 Had a couple of small bucks trot by the rig this morning and then on our way home from church, wandering down the roadside on one of our busiest streets, was a momma with twins, both of them still with their spots. Didn’t have a camera.