We had a cold front come through yesterday and last night with lots of 45 mph wind gusts. It’s still breezy today and definitely much cooler.

We didn’t really become Network Executives but we sure did have a fun time. 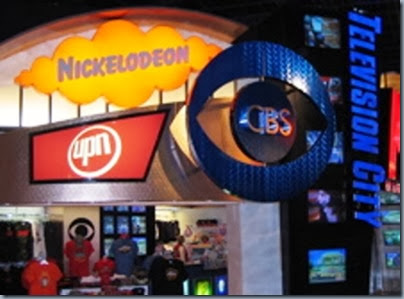 We headed out to the MGM Grand because I had read about this experience somewhere and thought it would be fun and it was free.

Ever thought you could do the job of a network executive, deciding which shows are put on the air and which ones end up in the waste bin? Network jobs are hard to come by, but you can weigh in on the decision-making process by letting your opinions be known at the CBS Television City Research Center at MGM Grand.

Participation is quite effortless. Viewers can pick up tickets in front of the research center. They then register at the counter in front of the center and line up about 10 minutes before their scheduled time.

Five minutes before the screening begins, viewers are led into one of four studios to watch the latest offerings from CBS, MTV, Nickelodeon and other Viacom networks. Viewers then are instructed on how to use the test pads and monitors to register their opinions, and settle into the viewing process.

The show's length will determine the time of the testing process. A survey following the program lasts about 15 minutes, so viewers should expect an hour for an hour-long show.  And since everything is done through touch screen, you won't have to worry about your hand cramping up from writing.

When we got there, we were the only two people in the screening. We got to rate the show Arrow which is on the CW network. Neither of us had ever seen the show before. Found out it was based on a comic book character and we both ended up liking the show. May have to check it out at home.

I totally forgot to take any pictures, but this was really a great way to spend an hour and half. However, it did take us about an hour to find the place – the MGM is HUGE. Then when we went to find our truck in the parking garage, neither of us could remember for sure where it was parked. We eventually found it and headed home to take care of the girls.

Speaking of the girls – Skittlez has this way of twisting her nose when you offer her a treat. We have been trying to capture that twist in a picture and it’s really not easy. But I think this one shows it quite well. Jim is sharing his shredded wheat with them. They love it. 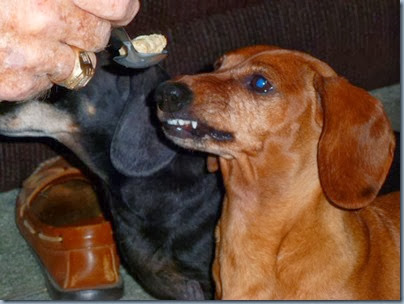