I am over two weeks behind in posting to our blog so it may take me a month to get caught up. But here goes.

We left Elephant Butte, NM on Friday, May 15, which is a couple of day early. A severe storm was going to be coming through the area with winds in excess of 45 mph, so we wanted to get out of it's way. Ended up in Tijeras, NM which is just outside of Albuquerque and spent two nights at an RV park on Route 66. On Saturday the kids had to work so Jim and I decided to explore part of the Turquoise Trail. 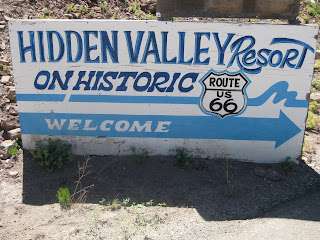 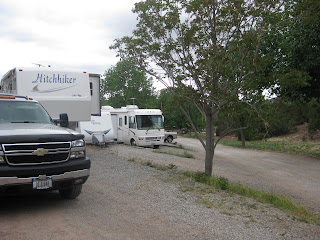 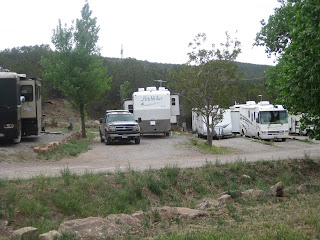 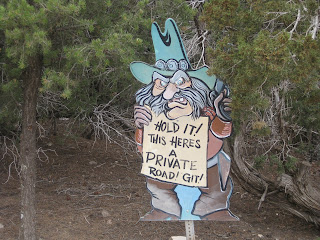 Tijeras is the gateway to the Turquoise Trail which encompasses 15,000 square miles and is located in the heart of central New Mexico. The trail links Albuquerque and Santa Fe and the name comes from the blue-green turquoise first mined by the early Pueblo people, an agrarian based society dwelling along the Rio Grande as early as 900 A.D. The Spanish arrived here as early as the 1500s. Francisco Vazquez de Coronado was the first of many explorers in New Mexico. Missionaries. Spanish settlers and Anglo-Americans all followed and joined the native American Indians already here.
The Turquoise Trail is synonymous with Native American spirituality, Spanish explorers, adventurous mining, and brave pioneers. A major Western gold rush occurred here around 1825, years before the California Gold Rush. But Cerrillos, (the little hills) was coveted long before the search for Gold for its rich deposits of turquoise, as well as lead ores, used to glaze and decorate traditional Rio Grande pottery. The Cerrillos hills represents three cultures and the longest intact record of historic stone maul and pick and shovel mining in the Southwest. Golden grew into a substantial town virtually overnight in the early to mid-1800s and received its name from its placer gold deposits. Madrid was mined by squatters in the early 1800s and later became a substantial company-owned coal mining town, with a population of over 3,000. 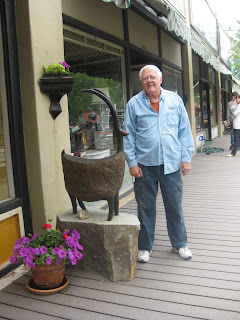 We ended up in Madrid (pronounced Mad (like Dad) rid). Because of the unique geology of this area, a phenomenon found in only two other mines in the world - both hard and soft coal - were mined here with shfts as deep as 2500 feet. When coal use declined the town became a ghost town. However, in the early 1970's artists and craftspeople arrived. They converted old company stores and houses into shops and galleries. 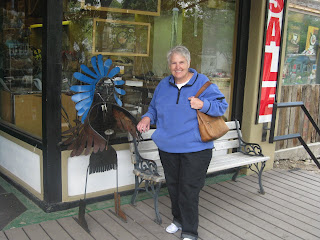 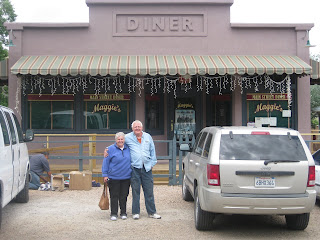 Madrid is also where the movie Wild Hogs was filmed. That's the film with John Travolta, Tim Allen, and two other "older" guys who take off on their motorcycles. The store behind me in this picture was the gas station in the movie and Maggie's diner is just now being set up as a store but wasn't open while we were there.
We had seen the move Wild Hogs before, but after being in Madrid we had to go buy it and watch it over again so we could say - we were there! 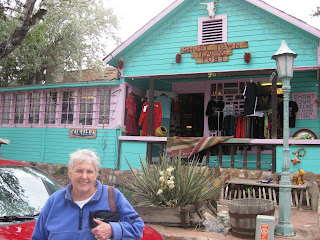 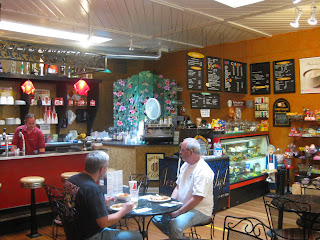 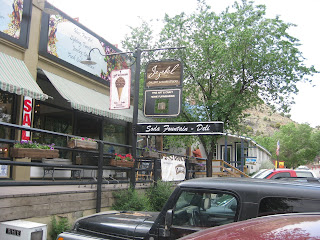 We had lunch at the Jezebel Soda Fountain which is the original soda fountain from the early 1900's. 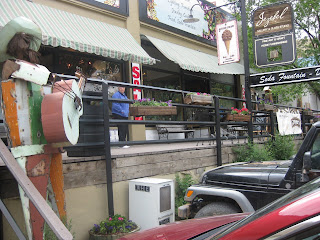