Jo's comment reminded me that I really should explain why we decided to head back to Montana instead of going to Northern Arizona for the summer. There are a couple of reasons.

One of the major reasons is the drought in Arizona. The lakes are really low and that does not make for very good fishing. I sure hope we have a decent monsoon season this year. The other reason is that Jim is feeling really good and wants to do some exploring as well as walleye fishing in Montana. His favorite thing to do. So we are headed north.

We left Apache Junction on Wednesday and headed for Kingman, AZ. Everything was going great until we were about two miles from the rest area we like to stop at. It's just south of Wickenburg. Jim started to act a little disoriented and I knew right away it was probably his blood sugar dropping. He was able to get us to the rest area and parked. Got some orange juice and a peanut butter and jelly sandwich and his blood sugar count went from 48!! to 145. The people who monitor his glucose machine immediately got in touch with him but he told them he wasn't alone and was getting some carbs into his body. It was also hard to find a place to park in the rest area because there were several police cars there and they had a whole area completely taped off. Nobody knew for sure what was going on but we all assumed it was probably somebody who had overdosed.

Jim took a nap and then we made it to Kingman. We're in the Zuni Village RV Park. When we made our reservations here, they were a Passport America Park. When we checked in the woman told Jim that the day before, the owners informed her that they would no longer accept PA. (Passport America PA is an RV Club that campground owners can join and offer campers spaces for 50% off.) Since there are so many RVs on the road now due to COVID, I'm sure they do not have any problem filling the park with full paying campers. From a business point of view it makes no sense to belong to PA. However, the woman in the office told the owners that we were coming in and had made reservations several weeks ago and they told her to honor our reservation but we were the last ones. 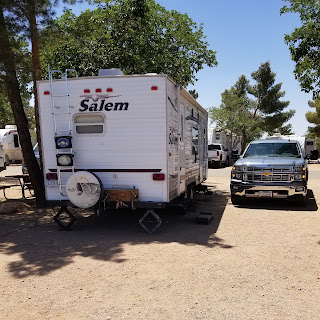 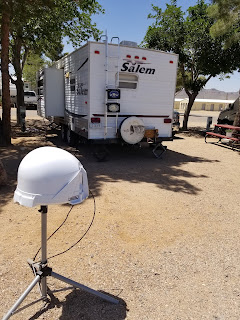 It has been very strange to travel without at least one dog with us. No stopping for them to get out or for feeding or giving them water. No listening to Skittlez whine and carry on about being in the truck. No worrying about leaving them in the Bungalow or the temperature. It's been very lonely and yet much easier in some ways. We are adjusting.