First the really good news. Both of Jim’s biopsies came back benign. So no more trips to the dermatologist for him until next year. Hopefully my visit turns out as good. 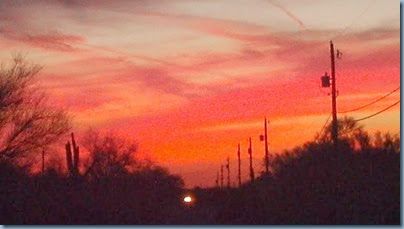 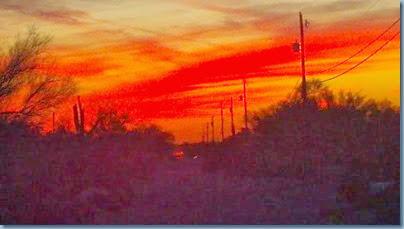 Now for the Bungalow Mods. A lot of the ideas are mine. I come up with the idea and then expect Jim to figure them out. Thank goodness he can do that. A lot of the modifications are small but important to us. I’ll probably do this in a couple of posts because there are many. 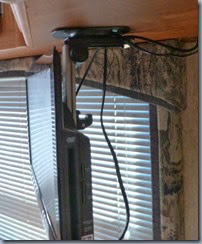 I hate having to crane my neck to look at TV. And besides that, our TV wouldn’t fit in that corner cupboard. I ordered a cabinet mount that would allow the TV to be mounted under that cabinet. Jim reinforced the cabinet floor with another piece of wood to ensure the TV will not fall during transit.

We talked about putting a door on the TV cabinet but to make it easier and cheaper Jim added a piece of molding to the front to hold things in the cabinet. I’m not sure this is going to work so we are still thinking about it. 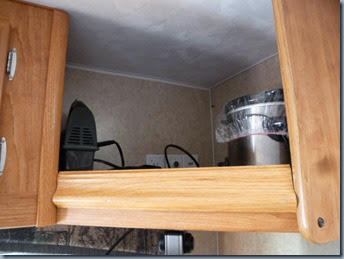 None of the drawers worked in the rig. They were the kind that you had to lift up to pull out and even Jim had trouble with them. He modified the guides that the drawers slide on and added magnetic catches to keep the drawers closed and even I can open them now. 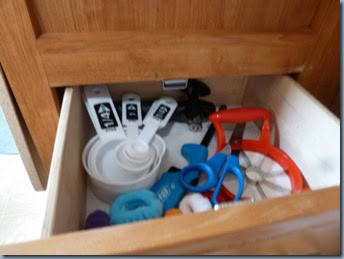 The electric jack worked before we left the dealership. By the time we got to Casa Grande it died and Jim had to hand crank the rig into place. When we got back to AJ Jim called the dealership and in typical fashion, they weren’t sure what was wrong but told us we could bring the rig back down and they would look at it. Jim then called Atwood (the brand of Jack) and after a couple of phone calls, he figured out that one of the screws was loose so the motor was not grounded properly. Once he was able to get that tightened the jack works fine. 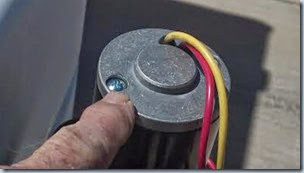 The propane cover that came with the rig does not have an opening in the top. That means that you have to lift the cover off every time you want to turn the propane off or on. Doesn’t sound like a big deal but with the Hensley Hitch, it’s a really tight fit. So we replaced it with a cover that has a top opening. We try to make life as easy as possible. 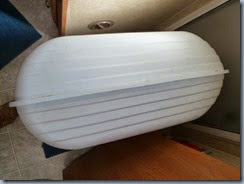 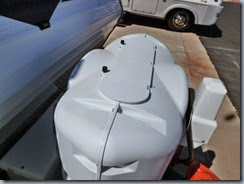 There were no towel bars in the bathroom. We talked about putting an over the door towel rack but decided to go with the rings instead. We also put up a new shower curtain and a shower head with a cut-off switch. 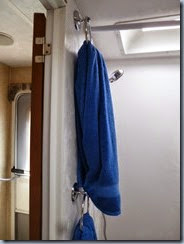 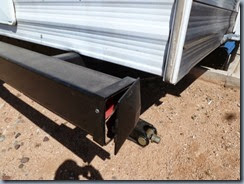 New clock and an indoor/outdoor thermometer. The clock is above the couch. The previous owners had put something up there and when they took it down it ripped the paneling. 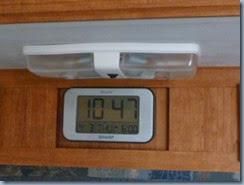 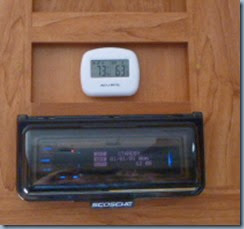 The next one definitely takes an explanation. The couch came with cup holders on each end. With the new mattress being so high the girl’s could not use their steps to get up on the bed. So we taught them to get up on the couch and then jump from there to the bed. It’s an easy jump. But they couldn’t get the grip to make the jump with the holes for the cups. Jim took out the cups, got a piece of wood, covered it with fabric and then nailed it down so the girls have a place to plant their feet. 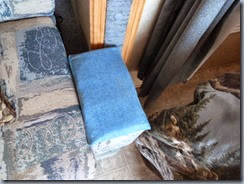