Finally, Some Excitement Around Here

Had a couple of moments of excitement yesterday.

First, Ginny saved a baby bird. She noticed him flapping against Pete’s carport. Seems Mom and Dad had built a nest up in the carport and had put string in the nest. The baby (who is learning to fly) got his foot caught in the string and was just hanging there.

Ginny to the rescue. She grabbed a ladder and Ron brought over his scissors that he carries in his pocket. Peg and I stood around, watched the rescue operation, and applauded. I didn’t have my camera with me so no pictures. Ginny got the baby snug in her left hand and then was able to cut all the string loose from his claw. All this time, Mom and Dad are flying over and around and making all kinds of noise. You could tell they were really worried about their baby.

After cutting him loose Ginny opened her hand and he just sat there for a moment. Then he fluttered off past our fifth wheel with Mom and Dad right there with him. He landed on the ground and was still there an hour later just getting his strength back. I eventually saw him fly off and Mom and Dad were still with him.

The second bit of excitement was a little scarier. Jim and John (our 91 year old neighbor) went fishing yesterday morning. Left about 8:00 and said they would be back about 2:00. About 1:40 I got a text saying they were still fishing and having a good time.

Next thing I know I get a text that says they are on their way home. When they get back Jim tells me the boat started to take on water. Seems a speedometer cable screw was placed below the water line and had worked itself loose. And the bilge pump decided not to work.

Jim, with John’s help, got the boat up on a plane and they made it back to shore. A bunch of guys were lined up at the dock to pull their boats out but Jim explained his problem and they let him go in front of them.

This morning, Marv, Ken and Jim are hard at work trying to fix the leak and figure out why the bilge pump didn’t work. Jim is laying down in the boat working on the bilge pump switch. 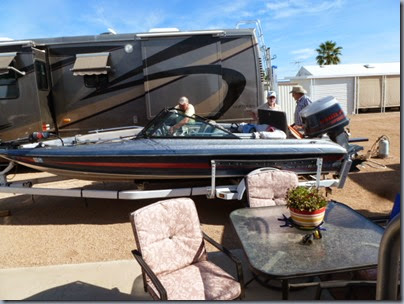 RIP bilge pump. Walmart to the rescue with a new one. It sure ruined the plans for any fishing today for Jim and Marv.

I am so glad they didn’t have to swim to shore.