We’re still here. Enjoying the beautiful weather. However, it is supposed to be HOT this week-end – 98 both days. Then back down to the low 90’s. 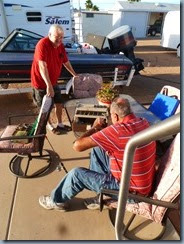 Jim and Marv went catching. That’s right – catching, not just fishing. They brought home 15 blue gill. Spent a couple of hours cleaning them and after they cleaned them they gave them to Vi and Charlie. Charlie just got home from having open heart surgery and was really happy to have some fish to enjoy. They are going fishing again on Friday.

Jim got a couple of other items done on the Bungalow. He got the inverter installed. When it was installed on the fifth wheel, he had to go outside to turn it off or on. This time he ran the wires into the Bungalow and mounted it at the foot of the bed. Much more convenient. 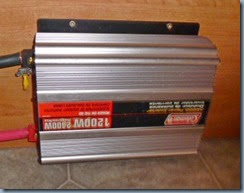 Our stove did not come with an igniter for the stove top burners. I know this doesn’t sound like any big problem because all you need to do is use a match or a bbq lighter. But I have this problem. My hands don’t work very well anymore. I cannot light the bbq lighter – I just don’t have enough strength. And have you priced fireplace matches lately? I did some research on line and found a guy who had installed a bbq igniter and showed it to Jim. Yes, Jim can do that. Now I can light the stove by myself. 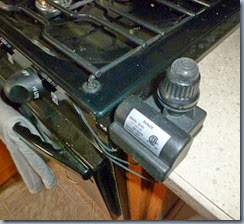 He also took all the stuffing out of the back of the couch and replaced it with much softer foam. Sure does make the couch a whole lot more comfortable.

He also made two cabinet doors – one under the dinette bench so we don’t have to lift off all the cushions and the board to get to the storage. 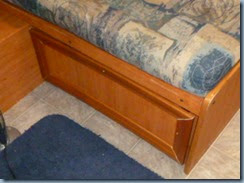 The other one was under the stove. This was space that wasn’t accessible until he took off the panel and added the door.

But I haven’t made him work all the time. I did let him take a break so we could go have lunch with Carol and Doug before they head north tomorrow. We went over to their place and went to Tom’s BBQ for lunch. It was sooo good. We’re hoping they’ll be coming through Helena while we’re there. We need to hit that ice cream place down on Last Chance Gulch.

Took this picture of them outside the restaurant. Safe travels friends. 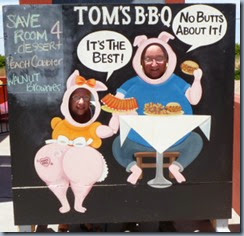