I totally forgot to tell you another Aunt Happy story. Remember when she discovered the lingerie at Kohl’s?  You can read the post here.

Guess what she wore to the hospital. Panties and camisole In black. The nurses all commented on how pretty it was and Happy was in her glory.

She is not going to be allowed to go home for a couple of weeks. Because she lives alone and not in assisted living, she is going to a physical rehab facility until she is strong enough to take care of herself again.

I also just found out that she may be 101 instead of 100. She was adopted as a baby and does not have a birth certificate. 100 years ago things like adoption were not discussed openly and throughout the years the information from her Mother and Dad changed as to her year of birth. 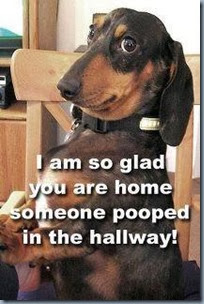 Yesterday was doctor appointments for Jim. The most important one was with the oncologist to get the results of his last cancer scan. However, we got a phone call early in the morning. Dr. Gordon was sick and they had to reschedule our appointment. So now I have to wait and worry until the 18th.

(No, our girls didn’t poop in the hallway. I just thought this was so cute.)

He did get his breathing test done and saw the pulmonologist. He has some decreased lung capacity which is considered normal since he had part of the lung removed. The doctor gave him a breathing exercise and also told him that the best thing he could do is to develop his stamina. So we will be working on that.

Played cribbage last night and I finally won. Been a really really long time since I’ve won so it felt kind of good.