I Got Apple Butter

First of all, I am behind on blog reading because blogger refuses to acknowledge that I follow any blogs. It’s driving me crazy.

Second, thank you for the very interesting comments on my last blog post.

Now for the important stuff – the apple butter.

On Friday we met up with Bob and Jo at the Old Spaghetti Factory in Phoenix. We have been following each other’s blogs for several years and we previously   tried to make plans to meet. They are staying out in Goodyear which is about 55 miles from AJ. 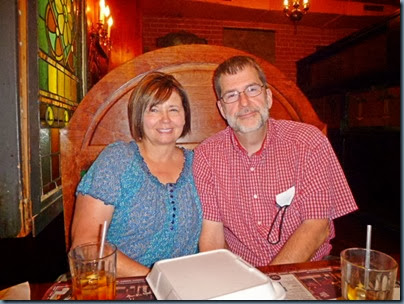 Back in December Bob and Jo came through Willcox, AZ and I asked them to check out Apple Annies. It used to be Stout’s which was famous for their apple pies. However, I loved their apple butter. It was so much like my Mom used to make. I grabbed a quart jar of it and Jim decided to taste it and we ended up with two jars.

When we stopped there last Spring we found that Stouts was out of business and Apple Annies was in the process of moving in. I was so sad. 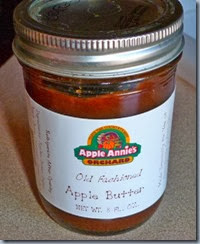 Not only did Bob and Jo check out Apple Annies for me they brought me a jar of apple butter. Thank you so much guys.

I had toast with apple butter this morning and Jim and I both agree – Apple Annies is as good as Stouts. Now we’re trying to figure out when we’ll be through that area so we can pick up another jar or two.

We had a wonderful visit with Bob and Jo and I discovered that Jo and I have several things in common. Looking forward to spending some more good times with these folks.