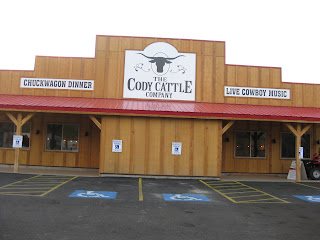 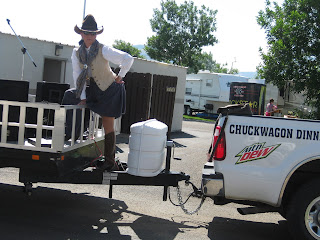 They've only been open a little over a month. Out near the rodeo grounds. 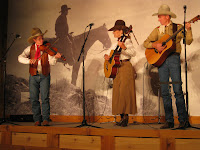 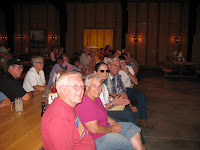 I was so tired of sitting in Billings watching the grass grow that when our friends, Judy & Gary, said let's go to Cody this week-end, I was packed and ready to go. And what a week-end it was. We went down to Cody on Friday and stayed at the Absoreeka Bay RV Park. Judy & Gary had the site right next to us and after we got set up, we were ready to go explore. 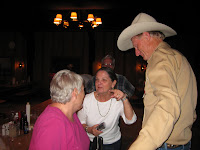 We thought we'd go to the gunfight at the Irma Hotel but while we were visiting we heard this music and thought somebody had really turned up their radio really loud. But it really wasn't a radio - it was the Rockin' M Wranglers. They were advertising their Chuckwagon Dinner and Show. They were so good that we changed about our minds and decided to go hear their whole show.

The food was excellent - barbeque beef, chicken, potatoes, baked beans, applesauce, cornbread, and a brownie. All you can eat and more if you want it. Great lemonade. 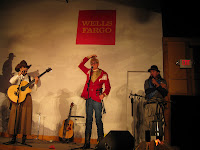 After dinner we were treated to a fantastic show. Jim & Jeanne Martin are wonderful as they give us a Sons of the Pioneer type of show. 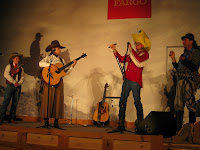 Jeanne is amazing at yodeling and Jim does a skit that had us laughing so hard our sides hurt. 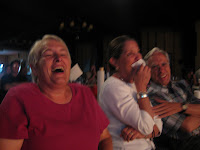 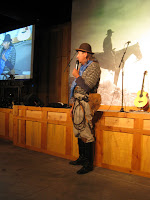 They also have a comedian, Jim, who is the warm-up act and then during the show he gets on stage and sings which just blows you away.

The fiddler player is only 17 years old and is the youngest person to ever be inducted into the Fiddler's Hall of Fame. What a cutie and when he fiddles - it's unbelievable. 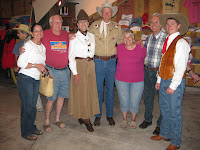 We really enjoyed this show and hope if you're ever in that area that you'll take a chance to enjoy yourself. (www.codycattlecompany.com and www.rockinmwranglers.com)
P. S. Jim had to get the picture of Jeanne climbing over the wagon when they came through the campground. Notice the leg.
Posted by Jim and Sandie at 9:06 PM