Isn't this a great name? 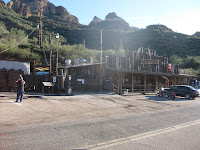 Tortilla Flat is Arizona's smallest official community having a U.S. Post office and voter'sprecinct.The town has a population of 6. And it has a fascinating history.

In the beginning - Tortilla Flat was a small grassy valley in the Superstition Mountains. Because of its location Tortilla Flat was affected by the search for gold in the Superstitons especially by the Spaniards during the late 1600s and early 1700s. During this time the Jesuit Priests had amassed a fortune in gold and didn't want to share it with the King of Spain. So according to legend, the Superstition Mountain region was where they hid their treasures. 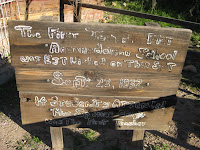 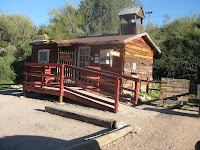 Tortilla Flat got it's name from a John Cline. He and some other folks either went to Phoenix for supplies or on a cattle drive (depending on which legend you believe) and partied too much. So they forgot to buy the supplies they needed after selling the cattle. On their way back to the Tonto Basin they ran out of food except for flour, so they mad tortillas to eat and Mr. Cline christened the flat area, Tortilla Flat. (This was probably in about 1886). 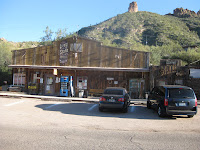 Tortilla Flat (the town) got its start because of the road construction to Roosevelt Dam in 1904. It is the last remaining stage coach stop along the Apache Trail.
Posted by Jim and Sandie at 11:29 AM