I have always wanted to see these dwellings since I first saw them in an encylopedia many, many years ago. But I'm going to have to wait for another time. We went to the visitor's center and I found out the climb up to the lower cliff dwellings was a steep 350 foot climb. My ankle is doing much, much better but not that good. I didn't get to go up to the actual dwellings; so I did some research on them and I'll be more prepared the next time we come here. 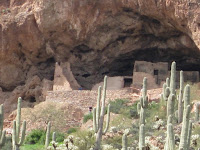 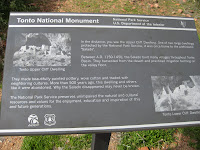 For over 100 years, these ruins have been called the Tonto Cliff Dwellings. We don’t know who named them, and there is no way of knowing when they were first seen by Europeans. Cowboys, settlers, and the cavalry were probably aware of the ruins by the 1870’s, although no known documentation exists from this period.

The diary of Angeline Mitchell provides the earliest known description of the dwellings. Angeline came by wagon train to Arizona in 1875. In 1880, under protest from her family, she agreed to teach school in the remote and often hostile Tonto Basin. In her diary, she described her experiences with cattle stampedes, warring Apaches, and a trip to the cliff dwellings.On December 12, 1880, she and six students visited the cliff dwellings. Awed by what they found, Angeline observed: “The dwelling is built of small rocks laid up in cement and is cemented inside and out, and sets well back beneath an overhanging rock. This rock is, I should think, about 200 ft. high and curves over. We found traces of 33 rooms and some 18 of them are in fair preservation. It is seven or eight stories high or perhaps more, I should think, judging from the poles still clinging high up to the rock... Across a gulch to the right is a second, smaller but deeply interesting and the most perfect I’ve ever seen. It has traces of 22 rooms and 16 are in fair order. 2 rooms and a hall are as perfect as the day they were finished. The hall is a narrow space between two rooms and has a short flight of steps leading to a landing on the upper floor. The stairs are quite wide, but very low, not more than 3½ to 4½ inches, I should think, in height from one step to the next…so worn by the myriad (of) feet there as to be hollow troughs in the center.”Much of what Angeline described is no longer there. Nature undoubtedly played a role in what was seen then, and what is here now, but increased settlement was introducing human impact.” 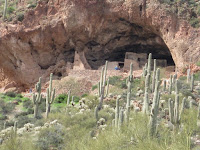 These dwellings were home to the prehistoric Salado people, named in the early 20th century after the life-giving Rio Salado, or Salt River. For three centuries, they made their living from what nature provided in mountainous desert terrain.Nomadic peoples found their way into the basin as early as 7,000 years ago. The first permanent settlements date from the latter half of the 8th century AD. Hohokam colonists, expanding their domain in the lower Gila and Salt river valleys (near present-day Phoenix), moved into Tonto Basin. By 850 the Hohokam were established in pithouse villages, where they lived for a few hundred years. Perhaps because of conditions within, perhaps because of outside influences, their way of life changed. Pottery styles, construction methods, settlement patterns, and other traits indicate that by 1150 the inhabitants of the basin no longer followed Hohokam traditions, or those of any other Southwestern group. A new culture had apparently emerged - the Salado. Like the Hohokam, the Salado were farmers. Bonding rocks with mud, the Salado constructed apartment-style dwellings adequate for sleeping, storage, cooking, and protection. The Salado lived in Tonto Basin for about 300 years. Sometime after AD 1450 they left. No one knows why, though the Salado were not the only ones to depart their homelands in the southern mountains of the Southwest around this time. The cliff dwellings, less than 150 years old, were abandoned to the sun and wind.
We have only a vague notion of who the Salado were. They left no written record of their existence, no chronology of events that shaped their society. The most vivid signs of life are in their pottery, in remnants of fabric, in smoke stains from their cook fires, and in hand prints on pueblo walls - all reminders that humans once led rich and productive lives here by the Salt River.
Posted by Jim and Sandie at 10:25 AM