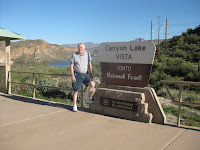 WOW! Canyon Lake is one of the four lakes created by dams on 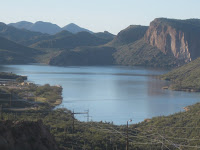 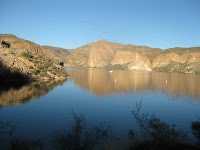 out of Apache Junction. The Apache Trail shadows the ancient footpaths of Apache Indians and is American's oldest roadway. The Apache Trail is the only reocgnized Historic and Scenic Highway in Arizona. The road was originally built as a haul and service road for the construction and maintenance of Roosevelt Dam. The trail begins with paved roads that soon turn into narrow dirt roads that meander along a landscape that ranges from rolling desert to high cliffs for 47 miles. The drive is along the backside of the Superstition Mountains where the secrets of the Lost Dutchman's Mine remain hidden. (more about that later) 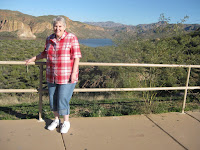