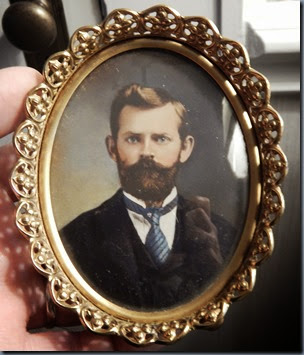 Before Jim’s hair turned gray, he was a redhead. In fact, of the six siblings, he was the only redhead. His Granddad Waggoner used to tease him unmercifully about being the red-headed milkman’s son. It just so happened that their milkman (remember them) was a redhead.

When Jim went to his granddad’s funeral, he saw his Mom and Grandma looking at a photo album. In the album was a hunk of red hair. Jim asked who’s that was and his Grandma told him it was his Granddad Waggoner. Jim had never known him without gray hair. That’s when he finally figured out that he truly did belong.

Janet had this picture of Granddad so it was really neat to be able to see this man who loved to tease his grandkids.