But I’m recovering. Not as fast as Jim though. Yesterday they moved him out of ICU, turned off most of his monitors, and this morning they removed the catheter and all the tubes should come out today.

I knew he was doing great when I called him yesterday morning before I headed up to see him. He had an omelet and an English muffin for breakfast. Most of you know, my husband loves to eat and that is an excellent sign that he is recovering nicely.

There has to be something about the lighting in this hospital that makes everything pink. The rest of my pictures turn out okay. But this is what greeted me when I got to the ICU yesterday. 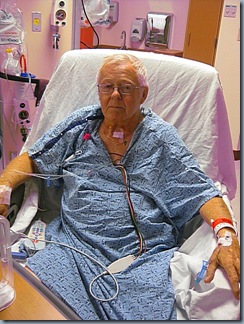 Notice – no oxygen. I think that is what surprised me the most. After having part of your lung removed I would think you would need to be on oxygen. But not my guy. He’s able to breathe deep enough to get the oxygen into his lower lungs.

The bandage on his neck is where they went in to do the biopsy on the lymph node.

Now the next picture is one of those you may not want to look at. This is his left side where they went in between the ribs to remove the lobe. The drainage tubes will hopefully come out today (Sunday). 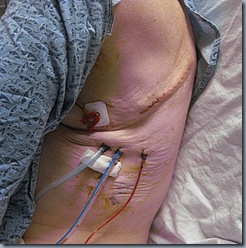 I was also amazed at how alert he was in the ICU after the surgery. Don and Faye stopped in to see him and he actually remembered the next day that they had been there.

Faye has been having some major medical problems and will be having surgery in the next week or so to remove her spleen. I sure appreciate them stopping by to check on Jim. Faye is the one who referred us to Dr. Field who did Jim’s back surgery.

We got Jim moved to a regular room and by then he was really tired. So I left and went home to feed the girls. Ginny and Mickey, our neighbors across the street, have been taking care of the girls for me while I spend so much time at the hospital. I think she has spoiled them rotten cause they really get excited when they see her coming. They also helped me with my awning. Guess the wind caught it and jammed it up somehow. Mickey and Ginny took care of that for me.

I then went to the movie with Dianna. Went to see The Descendants at the $3 theater. That was a great movie. Monday we’re planning on going again – this time to see War Horse. I still don’t like parking the truck but I think I’m doing better this time around.

The plan is still to bring Jim home on Tuesday.

This tree is blooming outside the hospital and I was finally able to take the time to stop and enjoy the beauty of the blossoms. I just haven’t been in the mood to see the signs of Spring around me and hopefully now I can appreciate all of the beauty of the Lord’s creations. 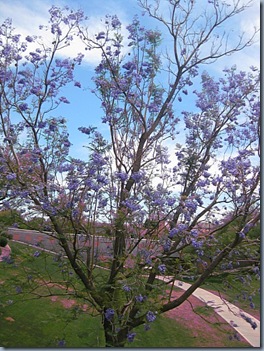