It’s been hot here and not a whole lot gets done. Tomorrow it’s supposed to be 108. We stay inside in the air conditioning most of the time. However, the early mornings are very pleasant and we really enjoy sitting outside. There is almost nobody left here in the park.

Our street is empty except for us so it’s really, really quiet. We have lots of rabbits for neighbors and Scooter chases them until her tongue is hanging to the ground. She certainly isn’t going to ever catch one but hope springs eternal. Skitz will chase one for a little ways and as soon as it runs she’s done. 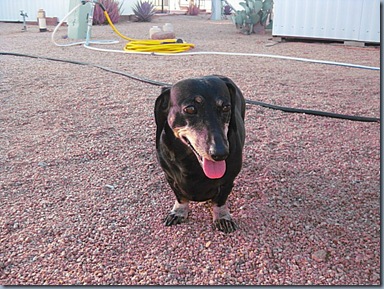 Jim overdid it yesterday. He pounded some stakes into the ground so we can tie down our awning. The desert is really hard and he had to really pound. Not a good idea just yet. He was pretty miserable last night and is still in some pain today. But definitely getting much better.

We see the surgeon on Tuesday and we’re hoping he will give us the okay to leave town shortly. Keep your fingers crossed for us. 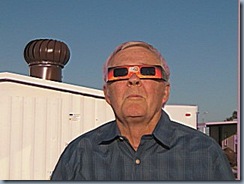 Tonight we watched the solar eclipse. That was just incredible. I ordered some solar glasses from Astronomers Without Borders (http://www.astronomerswithoutborders.org). They allowed us to look directly at the sun without damaging our eyes.

Our little camera doesn’t take very good pictures but Jim was able to get a couple of them that give you some idea of the eclipse. We were too far south to see the Ring of Fire but it was still awesome. 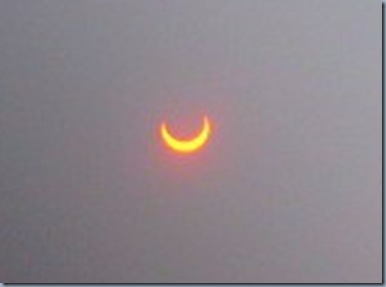 Astronomers Without Borders tells us that another event is happening in June. This is from their website: On 5/6 June 2012 a celestial takes place that is so rare that it will not be seen again by anyone now living. On June 8, 2004 Venus crossed the face of the Sun for the first time since the 19th century. This spectacle will be repeated again this June for the last time until 2117. Only six Venus transits have occurred since the invention of the telescope in the early 17th century.

Our glasses will work for that one also.