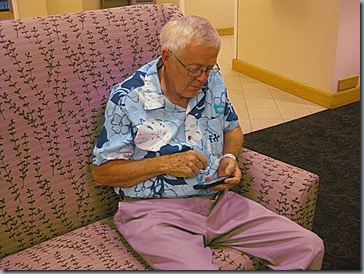 Playing solitaire while waiting. And those pants are beige NOT pink!!

That was the word from the surgeon today. Jim’s surgery was routine. Those are really wonderful words.

We were up at 4:30 and left for the hospital at 5:15. Got checked in and they came to get Jim about 6:45 to do some blood work and prep him for surgery. Then I got to go see him and talk to the surgeon and the anesthesiologist.

One of the things they had seen in the PET-CT scan was an abnormal lymph node on the outside of his right lung. It did not show up as cancer but the oncologist was concerned about it and after he and the surgeon discussed it, they decided that a biopsy was going to be done before surgery. We knew that this may be a possibility but we didn’t find out for sure until this morning.

If they found cancer in that node, they would not do surgery and Jim would have to do the chemo/radiation route. No cancer. Just an enlarged node. So on with the surgery to remove the lower lobe of the left lung. It took almost four hours for the biopsy and the surgery. He was in recovery for over an hour and then they moved him to the ICU and I finally got to see him.

He looks good. He’s on some really heavy duty pain meds and had trouble keeping his eyes open, but he came to long enough to tell me he loves me. That’s all that matters.

He’ll stay in ICU until tomorrow and hopefully I’ll get to bring him home on Tuesday. I’m exhausted and it will be an early night for me.

Once again our prayers were answered. 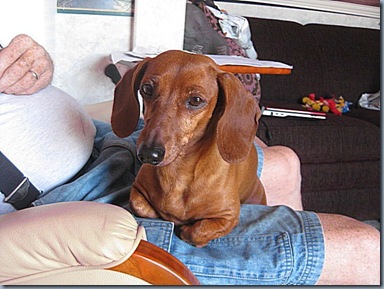