Jim’s been fishing as much as possible this week. He sure does like that boat of his. We’ll be taking the Lund (the original boat) back to Montana with us. It’s a 2003 and handles better on rough water. The chance of rough water is much higher in Montana than in Arizona. Don’t ask me why, I really don’t know but Jim said so.

We’ll leave the “new” boat (which is a 1986) here in AZ for the summer. One of our neighbors here in the park will let us keep this boat in his carport while we’re gone.

But I really have to tell you about Jim’s first trip out in the “new” boat. He almost sank the boat. He put the plug in the boat and at the time he thought the plug was a little high but went on his merry way. Unloaded the boat into the lake, parked the truck and trailer, and then got past the no wake zone and let her run. Well, the boat’s nose went straight up in the air; Jim looked back and saw all kinds of water in the back of the boat and thought several black thoughts. 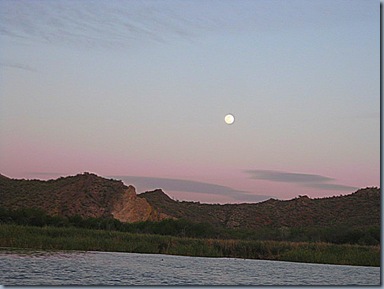 He finally got the front of the boat down and headed back to shore. By then there were several boats at the boat ramp so he has the bilge pump running and is trying to keep the boat from going under until he can get to the ramp, get the truck and get the boat out of the water. 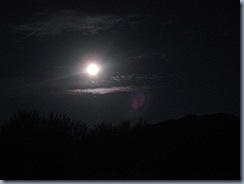 He watched water shooting out of the back of the boat and discovered that the plug he had put in wasn’t the right one. Remembered he had seen a couple of plugs in the glove box and after letting the water drain for about 20 minutes, he put the plug in properly and had a great cruise around the lake.

Wednesday night we went back to Superstition Skies with Paul and Marsha. 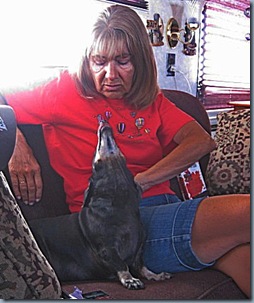 Marsha and Scooter. Now that is one happy old Scooter.