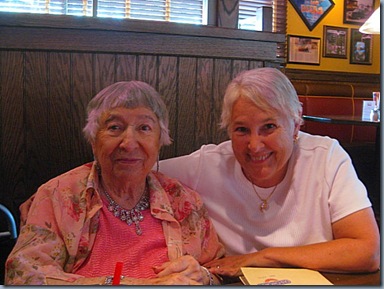 Aunt Happy that is. We spent Easter with Happy and she had us rolling on the floor with laughter.

She told us the story of when she was about 17 and her Dad, who printed the newspaper in a small Montana town, decided to take her Mom to Chicago for a long week-end. He left Happy in charge of the Administrative part of the newspaper office.

All was going along nicely until Ole Olsen came in to pay his bill. (This is not an Ole joke. She grew up in an area that was settled by Danes and Norwegians and that is truly what his name was.) Happy went over to look for his invoice and that’s when the problems started. 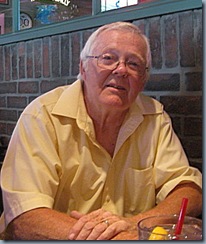 There were at least 10 Ole Olsen invoices in the drawer. So she asked Ole what his address was. Now remember this was 80 years ago. He told her he lived on the corner across the street from the Jacobson’s. So she went to check the drawer for the Jacobson invoice only to find there were 26 of them. Definitely going downhill rapidly.

Ole had no idea which Jacobson. He always called him Jacobson. Ole tried to help Happy out by telling her that the corner he lived on was about three blocks up and maybe four blocks over. Still no good.

She finally told him that he would have to wait for her Dad to get back but Ole was determined to pay his bill. Out to his truck he goes.

When he comes back in he has two live squawking chickens in his hand. Happy is not happy with live chickens and Ole insists she take them in payment of his bill. He tells her that her Dad will know which Ole paid because he told her Dad he was going to bring in the chickens. Dad just happened to forget to mention this to his daughter.

When she described her reaction to the chickens I didn’t think any of us were ever going to recover from laughing so hard. I wish you could have been there to hear the story directly from her. She is a much better story teller than I am.

Happy finally convinces Ole to take his chickens home and bring them back next week when her Dad would be there to record the payment.

What a great Easter Sunday.