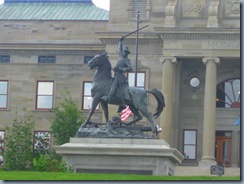 Meagher was an Irish nationalist who, in 1848, was charged by the British with sedition and shipped off to prison in Tasmania. He escaped in 1852 and immigrated to the United States.

At the beginning of the Civil War he joined the Union Army and rose to the rank of brigadier general. In 1867 he was appointed acting governor of the Montana Territory.

In the summer of 1867 he traveled to Fort Benton to receive a shipment of guns and ammunition. On the way he fell ill and stopped for six days to recuperate. However, he was still sick when he arrived at Fort Benton. Sometime in the early evening of July 1, 1867, he fell overboard from the steamboat and his body was never recovered.