The next few posts are going to introduce you to the Capitol of Montana. Jim and I took the tour train which is a really great way to see the town and hear about some of the history of the place. 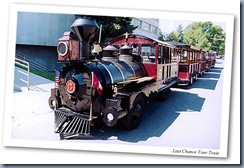 Helena was founded basically by mistake by four gold hunters from Georgia who was known as the Four Georgians. They were not having any luck finding gold around western Montana and on July 14, 1864 they decided that they were to take one last chance in panning a stream in the area that is now Helena. 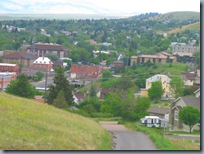 That night they found gold and named the stream, Last Chance Gulch. (And that is the name of Helena’s main street today.) Work spread and in a few short years more than 3000 people called this area home.

At first the town was called Crabtown. Other names bounced around were Squashtown and Pumpkinville. However, many of the miners were from Minnesota and wanted to name the town after a town in their home state, Saint Helena. So Helena it became. 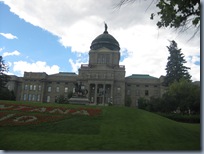 Montana because a territory in 864 and in 1875 the capitol was moved to Helena.