I know it’s been awhile since I had an update on Rod but I did hear from Rod’s DIL with a short update. He completed another round of chemo last week and his scans looked good. He is still putting up a good fight and we are grateful for that.

Loree asked how Skittlez was doing as an only dog. Most of the time she does great. She has always been afraid of everything and she would shake if something bothered her. That tendency to shake or shiver happens a lot more often now. She is also much more vocal when we leave her home alone. That problem is getting better with time. 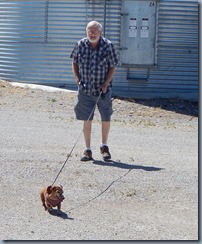 But the major issue we’ve found is when we try to take her with us for a ride. I don’t totally understand what is happening with her but since Scooter died, Skittlez does not like to ride in the truck. She has never liked to leave the house but she would settle down in the truck. Now she whines and pants the whole time. We took her with us when we went to explore Toston hoping she would enjoy being with us. Not happening. 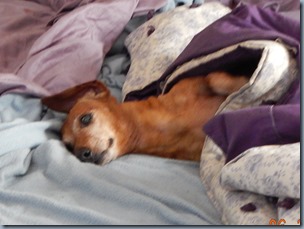 She also has this idea that every time the truck slows down, she gets to go for a walk and have a goodie. She sounds like she is being murdered when we go to get out of truck because she wants to be the first one out of the truck. Hopefully with time she will accept being in the truck.

This is her favorite place to lay. 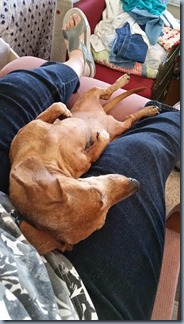 Thanks to all of you who knew where that RV was from. Wish I could have had a chance to visit with them. I did watch him climb into the driver’s seat and there is no way I could get up there without a ladder.

Also, for those of you who wondered why we don’t stay longer here at the lake, Skittlez and I have doctor appointments back in Billings. When they are over with we will be wandering slowly up to Kalispell to see family. And we will also be making a stop at the Back Room for bbq.