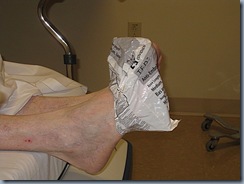 Love the comments about the bag. Michael: “I don't know the purpose of the bag, but I do know a bag on the toe is much better than a tag on a toe!”

Then along comes Kris with this comment:  “Maybe he needed a pedicure.”

Thanks guys for giving me a good laugh. I had never see the bag in action before either but the nurses here use it to help them get those horrible white socks on. They say it’s easier to get the sock over the heel and ankle. I guess I’ll find out when he gets home. 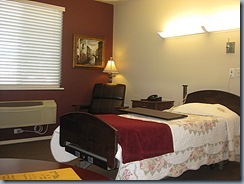 We got him moved to the rehab facility today. He’s feeling pretty good and getting stronger every day. They are going to work with him on stairs because that is going to be his biggest challenge in the fifth wheel. 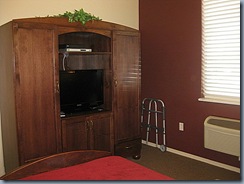 Take a look at this room. I’ve stayed in a lot of motel rooms that weren’t anywhere near this nice. Of course, this one is probably costing us a whole lot more.

Advanced Health Care of Mesa is a whole lot closer than the hospital was. It’s only about 15 miles one way. The only problem is I had to make the drive twice today. I had just barely walked in the RV after getting Jim settled when they called and asked me to bring his Byetta (insulin) in because their pharmacy didn’t have any. So back I drove. Not a big deal except for the fact that I really don’t like to drive our truck. It’s not so much driving the truck as it is trying to park it. I am really lousy. By the time this is over I should be a whole lot better.

WARNING: The following picture is of Jim’s back and it’s a little gross looking. But I wanted a record of it in our blog. So you can just not look. Personally I don’t think it looks too bad. 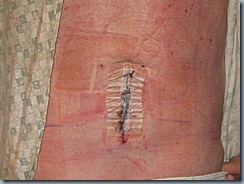 He loves all the attention he’s getting. 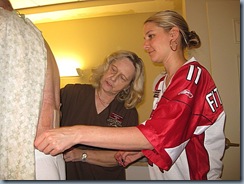 We’re not sure how long he’ll have to stay here. It all depends on him and how fast he gets his strength built up.