SHOOT OUT AT THE OK CORRAL 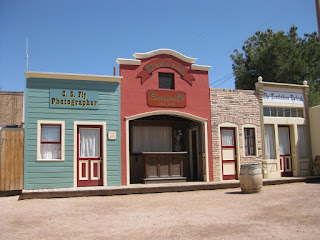 We spent the afternoon in Tombstone and went to the reenactment of the shootout at the OK Corral. Quite melodramatic but lots of fun.

Depending on which side of the story you listen to, the Earps and Doc Holliday are either heros or murderers. But the tale goes as follows:

In October 1880, Virgil Earp became city marshal of Tombstone and soon afterwards he recruited his brothers, Wyatt and Morgan as "special deputy policemen". The following year the Earps came into conflict with two families, the Clantons and the McLaurys.

Ike Clanton, Phineas Clanton, BillyClanton, Tom McLaury and Frank McLaury (known as The Cowboys) sold livestock to Tombstone. Virgil Earp believed that some of these animals had been stolen from farmers in Mexico. Wyatt Earp was also convinced that the Clanton brothers had taken one of his prize horses. Although the animals were not found, it put bad blood between the Earps and McLaurys.

Wyatt Earp also came into conflict with John Behan, the sheriff of Chochise County. At first this started as a quarrel over a woman, Josephine Sarah Marcus. She had lived with Behan before becoming Earp's third wife. Earp also wanted Behan's job and lanned to run against him in the next election. The two men also clashed over the decision by Behan to arrest Doc Holliday on supicion of killing a stagecoach driver during an attempted hold-up outside of town. Holliday protested his innocence and he was eventually released. In September 1881, Virgil Earp retaliated by arrestng one of Behan's deputies, Frank Stilwell, for holding up a stagecoach. The McLaurys and Clantons were friends of Stilwell and had helped put up his bail. 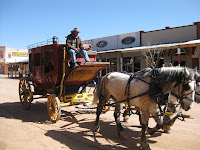 The night before the gunfight, Doc Holliday and Ike Clanton had words in the Alhambra Saloon and Doc challenged Ike to a duel. But Ike declined the offer because he was not armed and walked off. 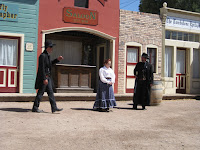 The next morning Ike Clanton armed himself and went looking for Doc Holliday. Before Clanton could find Holliday, Virgil andMorgan Earp snuck up on him and pistol whipped him. He was taken to court and fined $27.50 fo carrying firearms in city limits. After being disarmed and released, Ike and Tom McLaury joined Billy Clanton and Frank McLaury, who had just arrived in town. The men gathered at a place called the OK Corral in Fremont Street. Frank McLaury begins to get very angry when he learns that his brother Tom has also been pistol whipped by Wyatt Earp for supporting Ike's claims of self-defense. 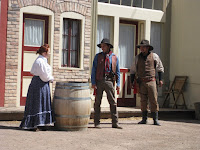 Sheriff Behan heads down Fremont Street towards the vacant lot where the Cowboys have gathered. The Sheriff tells The Cowboys "I don't wnat any trouble boys, let me have your wearpons." Ike Clanton and Tom McLaury respond and show the Sheriff that they are unarmed. Billy Canton is armed but tells the Sheriff he's getting ready to leave town. Frank McLaury is angry and tells the Sheriff that he won't give up his weapons until the Sheriff disarms the Earps because they had threatened to kill him. 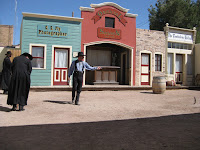 The Earp Brothers and Doc Holliday come walking down Fremont Street. To no avail, Sheriff Behan tries to stop them from going down to the vacant lot. He pleaded with Virgil Earp not to get involved in a shoot-out but he was brushed aside as the four men carried on walking towards the OK Corral. 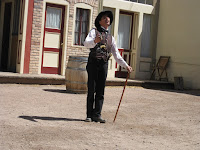 The gunfight at the O.K. Corral took place at 3:00 pm on Wednesday, October 26,1881. It began in the 18 foot wide lot behind the O. K. Corral next to C. S. Fly's Boarding House and Photo Studio. The inevitable showdown over control of Tombstone climaxed months of threats, romatic rivalries, stage robberies, pistol whippings, and arrest.
Nobody knows for sure who shot first. But Tom McLaury, Billy Clanton, and Frank McLaury were all killed while Ike Clanton was able to run away. Virgil Earp, Morgan Earp, and Doc Holliday were all wounded but did not die from their wounds. 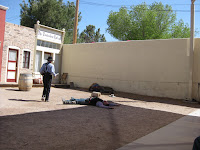 Sheriff Behan arrested the Earps and Doc Holliday for the murder of Billy, Tom, and Frank. However, after a 30 day trial it was determined that the Earps acted within the law.
FOLLOW UP
The Lawmen
Wyatt Earp was 33 at the time of the gunfight and died of old age in 1929.
Doc Holliday was 30 and died of tuberculosis in 1887.
Virgil Earp was 38 and died of pneumonia in 1905.
Morgan Earp was 30 and was murdered March 18, 1882.
The Only Remaining Cowboy was Ike Clanton who was 34 and ran away from the gunfight. He was killed by Detective Brighton in 1887.
The famous gunfight did not actually occur at the O.K. Corral. It occurred in a 15-20 foot space between Fly's Lodging House and photographic studio, and the MacDonald assay house west of it. The end of the gunfight took place in Fremont Street. Some of the fighting was in Fremont Street in front of the vacant lot. About 30 shots were fired in 30 seconds. Although only three men were killed during the gunfight, it is generally regarded as the most famous gunfight in the history of the Old West.
Posted by Jim and Sandie at 12:29 PM