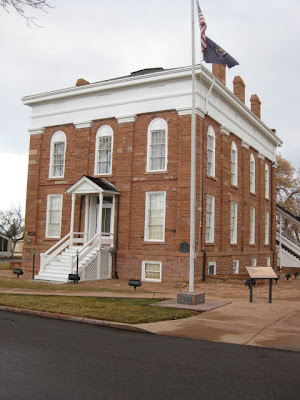 We spent the night in Fillmore and the next morning discovered all this fun stuff. Fillmore is located in central Utah. It is 148 miles south of Salt Lake City and 162 miles north of St. George, and considered the "last frontier" for growth in the state of Utah. The community was named by an act of the Utah Territorial Legislature signed by Brigham Young in 1851, honoring President Millard Fillmore. For a time, Fillmore was the territorial capital of Utah. The original Statehouse building stands today as the oldest existing governmental building in the state and is maintained by the State of Utah as a historic site and museum.
Posted by Jim and Sandie at 11:46 AM