I'm writing this blog post as things occurred so it will cover a couple of months worth. I need to remember all of this so my blog is where I keep the information.

On October 5, we met with Jim's oncologist for his six month check up and to talk about the CT Scan he recently had done.  For those of you who have been following this blog for years, you will remember that in 2012 Jim lost the lower lobe of his left lung to cancer. Dr. Tsai told us that his latest scan showed an area in his right lung (called "ground glass") was growing and he needed to have a biopsy.

With hospitals being over run with Covid patients and staffing problems, we finally got the biopsy scheduled for October 27th.

He also had several other appointments scheduled for the dermatologist,  internist, cardiologist and the sleep institute. Oh and don't forget the dentist.

We had to be in Scottsdale at 6:30 am for the biopsy. I was allowed to go into the hospital with him and everyone had to be masked. No problems with the biopsy and we were back home about 3:30. Now we wait.

Waiting for the biopsy with Happy Guy. Ginny sent him along for good luck. 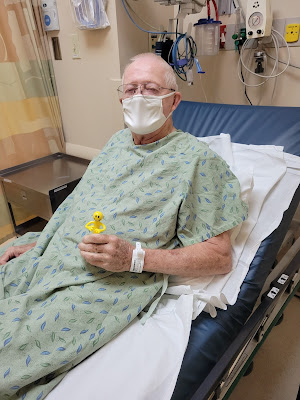 Jim was starved after the biopsy (not surprising) and they brought him this really good breakfast. He wiped it out. 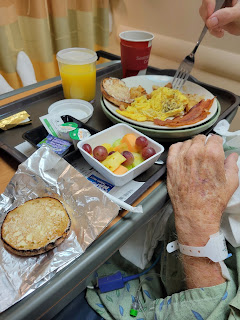 I hate waiting to get the results but between Jim's schedule and the doctor's we finally got to see Dr. Tsai on November 8th. That was the day we got the devastating news that he now has cancer in his right lung. Stage 1 which is the only good news.

Now we have to schedule a PET scan, an appointment with a surgeon and one with a radiologist.  I feel like we have spent zillions of hours on the phone trying to make doctor appointments.  However we have the scan scheduled for November 11, the radiologist on the 17th and the surgeon on the 22nd. Then Thanksgiving happens so we won't see Dr. Tsai until November 30.

While waiting we kept busy with him getting two teeth pulled and a new crown, spending the night at the sleep institute, having tests done on all his arteries, an ECHO and other heart tests (each one on a separate day), and trying to be patient.

Got sleep study results. Without his CPAP he stops breathing, on average, 54 times an hour and his oxygen level drops to 86%. This is not good. But when they put the CPAP on him, everything was great. We will be getting a new machine. His is somewhere around 15 years old so it's definitely time. 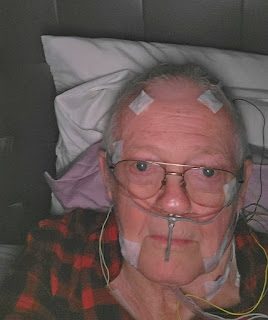 We get the results of all his heart tests on the 29th. Hoping for good news.

November 17th - saw the radiologist, Dr. Ashley Albert. She had access to Jim's PET scan info and was able to tell us that the cancer has not spread. It is stage one in his right lung only.

We took a deep breath and smiled for the first time in several weeks. Did a happy dance. After Dr. Albert explained the radiation process to us we are seriously considering that as our next move. We meet with the surgeon on the 22nd to see what he thinks is best. He's going to have to have a good sales pitch for surgery to change our thinking.

Radiation would involve five treatments, each one about 20 minutes long, five days in a row. There are very few side effects in the vast majority of cases. The location of the cancer is in the lower area of the lung so it would not interfere with his pacemaker/defibrillator which is in his upper left chest area. Radiation therapy has come a long way in the last few years. It has about a 90% success rate which is pretty good odds. We left her office feeling very much relieved.

Met with Dr. Gillespie, the surgeon. Well, guess what - he had a really great sales pitch. The surgery Jim had in 2012 involved cutting him open from front to back and spreading his ribs apart. Several days in the hospital and a long recovery time. How things have changed in the last ten years.

This is how I see Jim a whole lot of the time - in a doctor's chair. 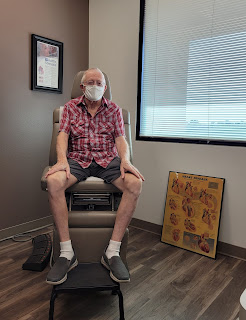 The surgeon makes four small cuts in his right side and uses a small camera to pin point the area that needs to be removed. Then they cut out the lobe and remove it through one of the cuts. He would be in the hospital for a couple of nights and then a couple weeks of recovery.  So now we are really not sure which way to go.

The good news is that the oncologist, radiologist and surgeon all are in constant communication about Jim's case. It's wonderful to be part of a team like this. The next step is for the surgeon to get Jim's records from his pulmonologist from January and his cardiologist who just happened to be running all the tests that are necessary. These tests will determine if Jim is healthy enough to have surgery.  (We see his cardiologist on the 29th to also get the results of all the tests.)

It seems Jim is wired all the time. This is for his EKG. 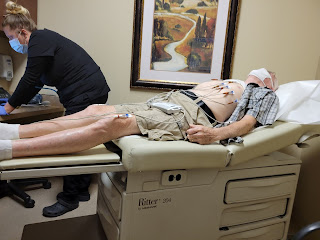 Once all the information is collected the team will meet to discuss what they think is the best way to go - radiation or surgery. We will get their recommendation on Tuesday when we see the oncologist. (if all goes as planned which is not guaranteed). Then Jim and I make our decision.

Slight hitch in our plans. The surgeon wants a pulmonology test done and we couldn't schedule it until Tuesday. That was the day we had hoped to get our decision made. So now we're not sure what day we can make our decision. Hopefully very soon.

Hate to leave you hanging but this post has really gotten long and we still don't have a decision made.  I'm going to start a new blog post when we know more.