We are still in Apache Junction where it has definitely warmed up. Our high yesterday was 105. The RV park is really getting empty. There are a few folks left but more leaving every week. Ginny and Mickey are here because of doctor appts until after Memorial Day so we have company here on the back row because we won’t be leaving til after Memorial Day either.

This has been a very sad year here in our RV park. We have had four of our friends die and at least two more are in the hospital with serious problems. I know we are getting to that age when death comes more often, but that doesn’t make it any easier to accept.

We have been beyond busy but the reason for that will be in another post. In between all the busyness we have lots of doctor appointments. Appointments for Jim, Rocky Joe, and me.

RJ’s second surgery on his mouth was a success and he is now our toothless wonder dog with no holes in his mouth. He is 100% Jim’s dog. He tolerates me if he has no other choice but if Jim is anywhere around, I get deserted. We think the barking is getting a little better but we’ll know more when we try to do some sightseeing on our way north.

I established a primary care doctor down here and she decided to do some blood work. I’ve now seen a kidney doctor and a urologist. I like the urologist but I am not at all impressed with the kidney doc. So I will continue to drink lots of water which is what he told me to do and worry about finding a different doctor when we get back. I still have one more appointment with the urologist.

Jim is the amazing one. At least that is what all his doctors keep telling him. He is now in REMISSION from his lung cancer. It has been five years since his surgery and he only needs to be checked once a year. That is about the best feeling ever.

I’m also glad we’re done with the oncologist. They were bought out by another cancer group and even though Jim has been going there for five years, they wanted all of this paperwork filled out. I don’t understand why they couldn’t just transfer his information but I was willing to fill some of it out. But they went crazy – they put a wrist band on him like they do in the hospital. Then half the paperwork was dealing with being admitted to the hospital and they wanted his signature on everything. We were not going to the hospital, we were going to spend five minutes being told everything was great. I think the final straw for me was the fact that they wanted to know who our mobile phone carrier is. At that point, I told Jim we were done with paperwork and he was not going to sign all of that stuff. So he took it back to the desk on our way out and said see ya. Just ridiculous.

His pulmonologist and his cardiologist both said his blood work is fabulous and his breathing is really good considering he is minus half of his left lung. His internist is amazed at his great blood sugar levels. So he is done with his doctor appointments and good to go.

Skittlez needs a quick visit with her doctor and they both need nails trimmed.  We’re slowly getting things ready.

Need bearings packed and tires and axles checked on the Bungalow. Truck got an oil change and tires rotated. It’s really hard to remember all the things that need to be done when you’ve been in one spot for so many months.

Look at what my dear friend Jeri made for me. I love it. 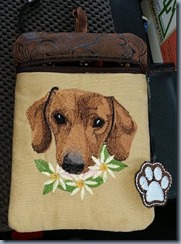 We are still having some beautiful sunsets. 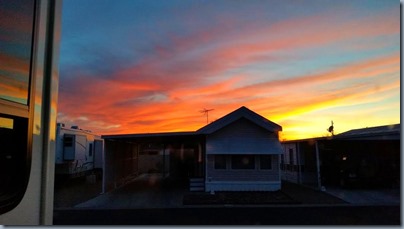 Until next time – safe travels and great adventures.