Just a few miles from the Rocket Garden is the Golden Spike National Historic Site. 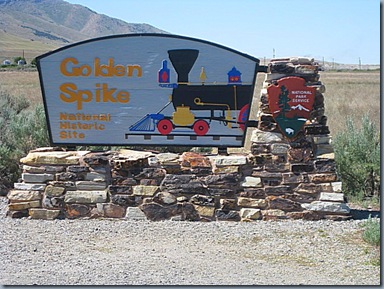 I doubt anyone in the crowd at Promontory Summit for the Golden Spike Ceremony in 1869 would have dreamed that over a century later, not far from this site, the same elements used to build the transcontinental railroad (technology, ingenuity and manpower) would conquer another vast distance – the distance beyond the land and mountains into the earth’s atmosphere and outer space.

On May 10, 1869 people celebrated the completion of the nation’s first transcontinental railroad. Years before, the idea of creating a railroad to span the vast distance across the US seemed impossible at first. But, technology, human ingenuity, and manpower converged to join the rails of the Union Pacific and the Central Pacific Railroads- the unimaginable- came true.

The Central Pacific and Union Pacific railroads - paid by the government both by cash subsidies and land grants - worked toward each other from Sacramento and Omaha. They used shovels, dynamite, and horse-drawn graders to lay the tracks. After the two railroads met at Promontory, they continued constructing parallel grades for almost 250 miles. This allowed them to claim more money from the government. Finally the government found out about it and told them to knock it off.

On May 10, Union Pacific No. 119 and Central Pacific No. 60 (better known as the Jupiter) locomotives were drawn up face-to-face on Promontory Summit. 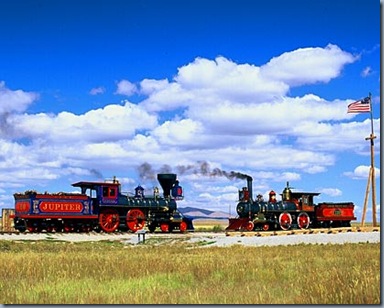 There were actually four stakes that were driven on that day: 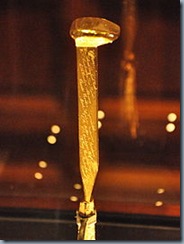 The gold spike was made of 17.6 karat  copper-alloyed gold. It was dropped into a pre-drilled hole in the laurel ceremonial last tie, and gently tapped into place with a silver ceremonial spike maul. The spike was engraved on all four sides. (The original gold spike is in a California museum. It was privately made and paid for and was returned to the owner after the ceremony.) 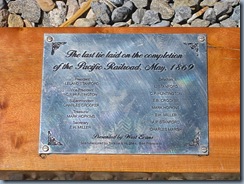 To drive the final spike, Stanford lifted a silver spike maul to drive the spike into the pre-drilled hole in the tie, completing the line. Both Stanford and Hewes missed the spike, but the single word "done" was nevertheless flashed by telegraph around the country.  Immediately afterwards, the golden spike and the laurel tie were removed, lest they be stolen, and replaced with a regular iron spike and normal tie. At exactly 12:47 pm, the last iron spike was driven, finally completing the line. 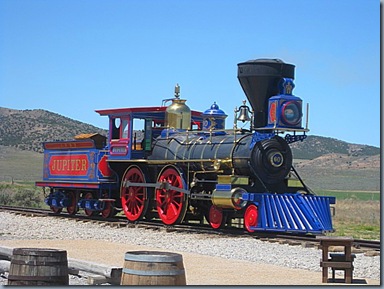 The Jupiter pulled Central Pacific’s President, Leland Stanford’s special train to Promontory Summit. It was built in 1868 and was a wood burning locomotive. The conical chimney, known as a “balloon stack” contained a spark arrestor. In 1909 the locomotive was scold to scrappers for $1,000. 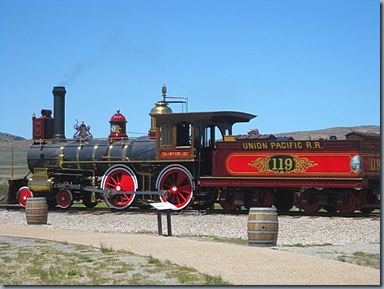 No. 119 pulled Union Pacific Vice-President Thomas Durant to Promontory Summit. No. 119 was a coal burning steam locomotive. It was also scrapped in the early 1900’s for $1,000. 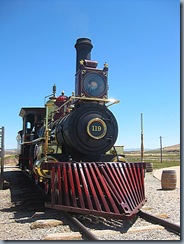 The two locomotives that are used at the site today are almost exact replicas. They are within one-quarter inch of the original

The original engines were that shiny and colorful.They were built during the Victorian Age, and reflected the designs and craftsmanship of the era.

I didn’t realize that 2,000 gallons of water will get a steam locomotive approximately 15 to 30 miles. They they’ll have to stop and fill up to get the next 15 to 30 miles. 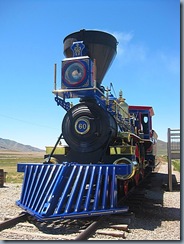 In 1904 a new railroad route called the Lucin cutoff was built by-passing the Promontory location to the south. By going west across the Great Salt Lake from Ogden, Utah, to Lucin, Utah, the new railroad line shortened the distance by 43 miles and avoided curves and grades. Main line trains no longer passed over Promontory Summit. Most of the track was pulled up to be used during WWII.

If you visit this site, you need to be there at 1:00 p.m. for the steam demonstration. It was so cool. My internet connection is not strong enough for me to include a video. There are some really neat ones on You Tube but I don’t know how to send you to them. The sound of the steam and the whistle – makes this old heart just race.