Thursday was probably about the most perfect weather day we have had in months. The sun was shining but it wasn’t hot, there was a breeze but it wasn’t windy. There were a few clouds but it wasn’t cold. I want every day to be just like that one.

As a child I fell in love with riding the train. We had a train called the “Goose” which was a single diesel-powered train that made daily round trips between Williston and Watford City, ND and Sidney and Richey, MT, a distance of about 300 miles. Being able to take a ride on the “Goose” was definitely a highlight of my young life. I had to save my allowance for months in order to ride to Williston and back. Used to go down to the rail yard just to watch the “Goose” arrive and see the people who got off or on.

This is the newspaper report of the Goose’s final run. The picture at the bottom is not the actual Goose but is the same type of train.

Williston, N. D. – the Great Northern Railway Company "Goose," a daily passenger train operating between Williston, and Richey, Mont., has made its final run. An order issued by the Interstate Commerce Commission authorized the railway to discontinue the service. The firm claimed it was losing $200 a day on the "Goose" run, which came into operation in 1932.

An I. C. C. hearing on the matter was held in Sidney three months ago, the first hearing of its kind under the Transportation Act, which simplifies service abandonment. The train also serviced Sidney and Watford City, N. D. Last year the Montana Railroad and Public Service Commission authorized discontinuance of the north "Goose." between Williston and Scobey. This was replaced by "truck" service.

Can you believe it, they replaced a train with trucks. How sad.

When I learned about the transcontinental railroad in school, I told my folks that someday I was going to visit the spot where they met. And today that item on my bucket list happened.

Since I took a detour into the 1950’s this post is going to be way too long and I’m going to make it two posts. 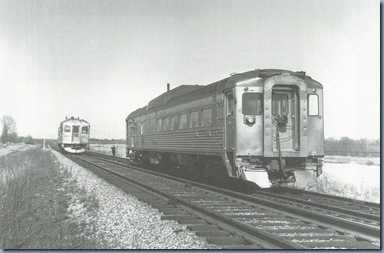