We covered all of 70 miles on Wednesday into Santa Fe. We had planned on camping at the Camel Rock Casino but their parking lot for RV’s is dirt and the wind gusts were 50 mph. It was a a mess. So we broke down and went into a park in town.

We stayed at the Los Suenos de Santa Fe RV park. Santa Fe is an expensive area to visit. Our two nights, with a Good Sam discount, was $70.50. That is definitely more than we usually pay. However, it was the cheapest rate that I could find.

It’s hard to find the park because the city council won’t let them put out a sign on the road. That’s the same city council that won’t let the Fairgrounds rent out campsites any more either. So if you plan to stay there, call and get the directions which involved parked Ryder Rental trucks and The Lofts. 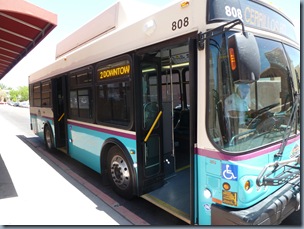 The major plus for this park is the fact that the city bus picks you up right outside the park and takes you downtown to the plaza. For $1.00 you can get an all day geezer pass. Or you can pay $1.00 for the ride down and $1.00 for the ride back to the park. This is definitely the way to see downtown Santa Fe. Very narrow streets and no parking. 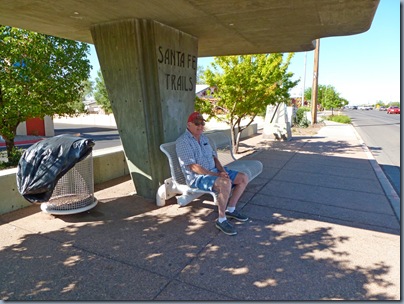 The Spitz Clock – The Spitz Jewelry Store was established on the Plaza in 1881 and a clock, without works, was place in front of the store for an advertisement. This clock was replaced by a functioning clock and stood until 1915 when it was knocked down by one of the first motor trucks in Santa Fe. A used clock was found in Kansas and was put back up. When the plaza was developed in 1967 the clock was donated to the city.

Lots of colorful murals all over the city. 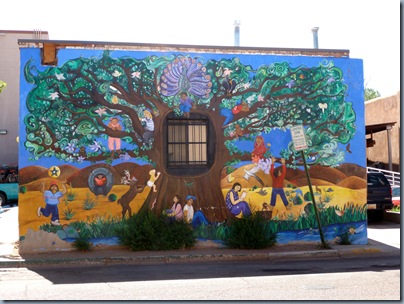 Santa Fe Plaza has been the commercial, social and political center of Santa Fe since about 1610 when it was established by Don Pedro de Peralta. The original Plaza was a presidio (fort) surrounded by a large defensive wall that enclosed residences, barracks, a chapel, a prison and the Governor's palace. Eventually the wall gave way to large houses built by high-ranking Spanish officers and officials. 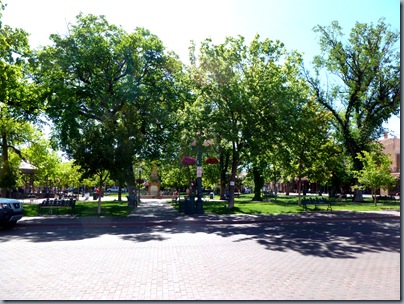 Look at how green the grass and trees are. Been a long time since we’ve seen that kind of green. 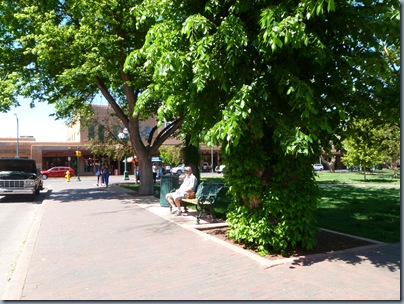 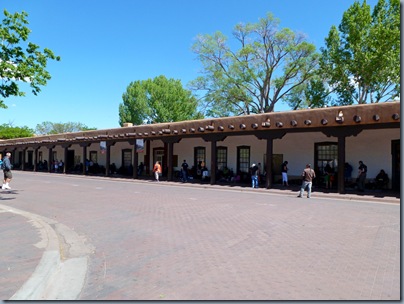 This picture is for Denise. Lots of Harley riders. 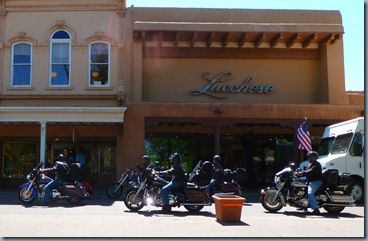 But we did see these clouds. Been a long time since we’ve seen clouds as well as the green in the plaza. 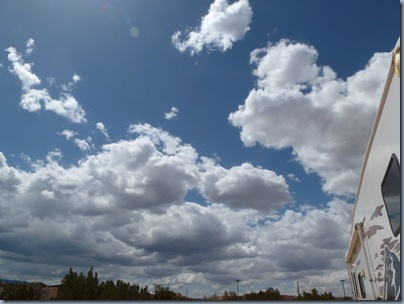